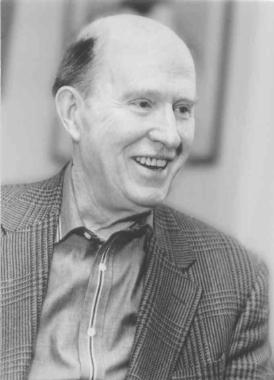 Archie Randolph Ammons was born on February 18, 1926, on his family’s small farm near Whiteville and later moved to Chadburn. It was a hardscrabble life and growing up in the country during the Great Depression gave him, as one critic observed, “not only an intimate acquaintance with nature but also a keen sense of the precarious nature of existence.” His early years on a tobacco and cotton farm provided the pastoral setting for some of his most memorable work, as well as the inspiration for poems about mules, hog-killings, hunting, and farmlands.

Ammons started writing poetry during the long hours aboard a Navy destroyer escort in the South Pacific. After World War II, he attended Wake Forest University, where his interest in science would influence the unique diction of his poetical style. After a few months of graduate school, he became principal of Hatteras Elementary School and absorbed the sights and sounds of the Outer Banks for a year. He also worked jobs as a real estate salesman, an editor, and an executive in a glass manufacturing firm before he began teaching at Cornell University in 1964.

Ammons has been described as a major American poet in the tradition of Ralph Waldo Emerson and Walt Whitman. Generally opting for free forms, he has been concerned with man’s relationship to nature, the problems of identity, permanence and change, and the processes of nature. His whimsically formatted Tape for the Turn of the Year was originally written on a roll of adding machine tape in the form of a journal covering the period December 6, 1963, to January 10, 1964. Many think his Expressions at Sea Level, Corsons Inlet: A Book of Poems among his best work.

A two-time winner of the National Book Award, plus the Bollingen Prize and the National Book Critics Circle Award for Poetry, Ammons published nearly thirty volumes of poetry, including Glare (1997), Garbage (1993), A Coast of Trees (1981), Sphere (1974), and Collected Poems 1951-1971 (1972). His many honors included the American Academy of American Poets’ 1998 Tanning Prize, the Poetry Society of America’s Robert Frost Medal and the Ruth Lilly Prize, as well as fellowships from the Guggenheim Foundation, the MacArthur Foundation and the American Academy of Arts and Letters.

His last book, Glare, was praised for its “riveting, iconoclastic freshness” by the judges who awarded him the $100,000 Tanning Prize. Despite his many accomplishments, upon learning of this singular Academy honor, Ammons cast his mind back to his early years as a struggling poet. “I greatly appreciate the recognition,” he told an interviewer. “It rings back to the earliest days when there was no recognition or support – and it means a lot to hear those bells.” The poet lived with his wife, Phyllis, in Ithaca, New York, where he was Goldwin Smith Professor Emeritus of Poetry at Cornell.

Shit List; Or, Omnium-gatherum Of Diversity Into Unity (No Comments »)