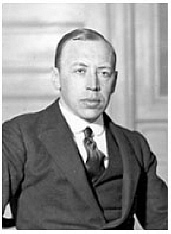 Alfred Noyes (September 16, 1880 – June 25, 1958) was an English poet, best known for his ballads, “The Highwayman” and “The Barrel Organ.” Born in Wolverhampton, England, he was the son of Alfred and Amelia Adams Noyes. Noyes attended Exeter College, Oxford, leaving before he earned a degree. At 21 years of age, he published his first collection of poems, The Loom Years. From 1903 to 1908, Noyes published five volumes of poetry books, including The Forest of Wild Thyme and The Flower of Old Japan and Other Poems.

In 1907, he married Garnett Daniels. In 1914, he was given the opportunity to teach English literature at Princeton University, which he taught until 1923. Noyes’s wife died in 1926, causing him to convert to Roman Catholicism. He wrote about his conversion in The Unknown God, published in 1934. After his wife’s death, Noyes married Mary Angela Mayne Weld-Blundell. He had three children with her: Henry, Veronica, and Margaret. He later started dictating his work as a result of increasing blindness. In 1953, his autobiography, Two Worlds for Memory, was published. On June 25, 1958, Noyes died, and was buried on the Isle of Wight. During his life, Noyes wrote around sixty books, including not only poetry books, but also novels and short stories. Noyes’s poetry supports patriotism and war heroes, and reflects his appreciation for nature, his respect for explorers of the scientific world, and his faith in God.

Biography By: This article is licensed under the GNU Free Documentation License and uses material adapted in whole or in part from the Wikipedia article on Alfred Noyes.

The Highwayman (No Comments »)