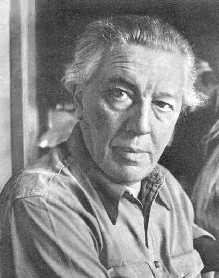 André Breton (February 18, 1896 – September 28, 1966) was a French writer, poet, and Surrealist theoretician. His writings include the Surrealist Manifesto of 1924, in which he defined surrealism as pure psychic automatism.

Born into modest origins in Tinchebray (Orne) in Normandy, he began to study medicine without enthusiasm for the sake of his family. Mobilised to Nantes in 1916, he met Jacques Vaché there, the spiritual son of Alfred Jarry, a young man who lived his life like a work of art and committed suicide at age 24. Jacques Vaché would have considerable influence on Breton, even if all that remains are some war letters.

In 1919, Breton founded the review Littérature with Louis Aragon and Philippe Soupault. He also connected with Tristan Tzara (Dadaism). In Les Champs Magnétiques (“The Magnetic Fields”), a collaboration with Soupault, he put the principle of automatic writing into practice. He published the Surrealist Manifesto in 1924, and was editor of La Révolution surréaliste from 1924. A group coalesced around him: Philippe Soupault, Louis Aragon, Paul Éluard, René Crevel, Michel Leiris, and Robert Desnos.

Anxious to combine the “changing of life” of Rimbaud with the “transforming of the world” of Marx, Breton joined the Communist Party in 1927, from which he was expelled in 1933. Under his influence, surrealism became a European movement that touched all domains of art and deeply called into question the cause of human understanding and the types of views given to things and events.

Dissatisfied with the Vichy government, Breton sought refuge in the United States in 1941, and returned to Paris in 1946, where he continued to foster a second group of surrealists until his death, in the form of expositions or reviews (La Brèche, 1961-1965).

André Breton died in 1966 and was interred in the Cimetière des Batignolles in Paris.