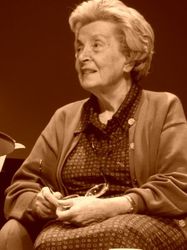 Andrée Chedid (1920-2011), novelist, poet, and playwright writing in French, was born in Egypt of Lebanese descent. She wrote the first of twenty volumes of verse while she was a student at the American University in Cairo. She has also written ten novels as well as a number of plays, of which the best-known is Bérénice d’Egypt (1981). She has won many prizes: for the whole sweep of her work, the Grand Prix of Belgium in 1975, three French prizes for her poetry, the Prix Goncourt for the short story. In 1991, the journal Sud devoted an issue to her entitled Andrée Chedid, Voix multiple.