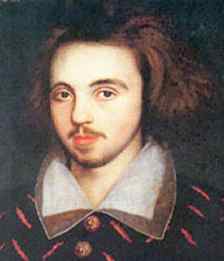 Christopher Marlowe was an English dramatist, poet, and translator of the Elizabethan era. He was born in 1564, the same year as Shakespeare, and was a product of the same social class. Unlike Shakespeare, however, Marlowe was university-educated. In 1584 he earned his B.A. at Corpus Christi College, Cambridge and in 1587 he earned his M.A.

Marlowe’s first known play to be performed on the London stage was 1587’s Tamburlaine, the story of the conqueror Timur. The first English play to make effective dramatic use of blank verse, it marks the beginning of the mature phase of Elizabethan Theatre. It was a smash success, and Tamburlaine Part II soon followed. The sequence of his remaining plays is unknown. All were written on controversial themes. Doctor Faustus, based on the recently published German Faustbuch, was the first dramatic version of the Faust legend of a scholar’s dealing with the devil. The Jew of Malta, depicting a Maltese Jew’s barbarous revenge against the city authorities, featured a prologue delivered by Machiavelli himself. Edward the Second, which may have been inspired by Shakespeare’s earliest history plays, was an English history play about the dethronement of Edward II by his dissatisfied barons and his French queen (the possibility that Elizabeth I might be dethroned by pro-Catholic forces was very real at the time). The Massacre at Paris was a short, sketchy play portraying the events surrounding the Saint Bartholomews Day Massacre in 1572, an event that English Protestants frequently invoked as the blackest example of Catholic treachery.

His other works include the first book of the minor epic Hero and Leander (published with a continuation by George Chapman in 1598), the popular lyric The Passionate Shepherd to His Love, and translations of Ovid’s Amores and the first book of Lucan’s Pharsalia.

The two parts of Tamburlaine were published in 1590; all his other works were published posthumously. In 1599 his translation of Ovid was banned and copies publicly burned as part of Archbishop Whitgift’s crackdown on offensive material.

Marlowe’s plays were enormously successful, thanks in part, no doubt, to the imposing stage presence of Edward Alleyn. He was unusually tall for the time, and the haughty roles of Tamburlaine, Faustus, and Barabas were probably written especially for him. Marlowe’s plays were the foundation of the repertoire of Alleyn’s company, the Admiral’s Men, throughout the 1590s.

Biography By: This article is licensed under the GNU Free Documentation License and uses material adapted in whole or in part from the Wikipedia article on Christopher Marlowe.