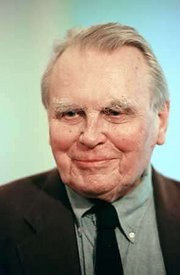 Czesław Miłosz (pronounced [‘ʧεsȗav ‘miȗɔʃ]; June 30, 1911 -August 14, 2004) was a Polish poet and essayist. Czesław Miłosz won the Nobel Prize in Literature in 1980, when he lived in America. He spent the last days of his life in Kraków, Poland.

He was born in Szetejnie, Lithuania and always underlined his connection to Grand Duchy of Lithuania. Miłosz studied law at the University in Vilnius. His childhood was spent partly in Russia around the time of Revolution. In 1944 he refused to take part in the Warsaw Uprising.

A diplomat for the communist People’s Republic of Poland, he broke with the government in 1951 and sought political asylum in France. In 1953 he received the Prix Littéraire Européen, a European literature prize.

In 1961 he became a Professor of Slavic Languages and Literatures at the University of California, Berkeley. He retired in 1978 but continued to teach there. When the Iron Curtain fell he was able to return to Poland.

In addition to his poetry, his book The Captive Mind is considered one of the finest studies of the condition of intellectuals under repressive regimes.

In The Captive Mind he said that the intellectuals who became dissidents were not necessarily the ones with the strongest minds, but those with the weakest stomachs. The mind can rationalize anything, he said, but the stomach can only take so much.

He also said that as a poet he avoided touching his nation’s wounds for fearing of making them holy.

Czesław Miłosz is honored at Israel’s Yad Vashem memorial to the Holocaust as one of the “Righteous Among The Nations.”

His poems were put on the monuments of fallen shipyard workers in Gdańsk. Many of his books and poems have been translated into English by his friend and Berkeley colleague Robert Hass.

Biography By: This article is licensed under the GNU Free Documentation License and uses material adapted in whole or in part from the Wikipedia article on Czesław Miłosz.

On Angels (No Comments »)