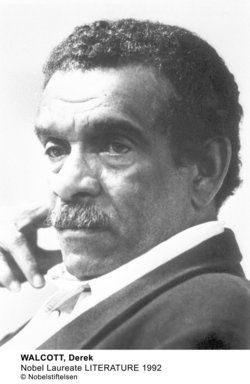 Derek Alton Walcott (born January 23, 1930, died March 17, 2017) was a poet, writer and artist who was in the vanguard of the post-colonial school of English language writing. He was born in Castries, St. Lucia.

His work, which developed independently of the schools of magic realism emerging in both South America and Europe at around the time of his birth, is intensely related to the symbolism of myth and its relationship to culture. He is best known for his epic poem, Omeros a reworking of Homeric story and tradition into a journey around the Caribbean, and beyond to the American West and London.

In 1997, he collaborated with Paul Simon on the Broadway musical The Capeman. He won the Nobel Prize for Literature in 1992.

Biography By: This article is licensed under the GNU Free Documentation License and uses material adapted in whole or in part from the Wikipedia article on Derek Walcott.