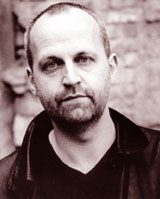 Don Paterson (born 1963) is a Scottish poet and musician who was awarded the TS Eliot Prize for poetry for the second time in six years in 2004, and having already won the poetry category narrowly missed the same year’s Whitbread Prize.

Born in Dundee, Scotland, he was initially interested in a career in music and spent four to five years touring with bands and jazz acts in the local area. After spending time in Brighton he ended up in London in 1995 to take up the post of Poetry Editor at Picador. He returned to Scotland in Edinburgh in 1998 to write a computer games column with poet Jo Shapcott for The Times, write other journalism and concentrate on his verse.

Aside from a series for BBC Radio 4 entitled Kailyard Blues and a melodrama called The Land of Cakes for Dundee Rep, he was awarded the TS Eliot Prize for poetry in 1997 for the work God’s Gift to Women. His 2003 work Landing Light repeated the trick.

Biography By: This article is licensed under the GNU Free Documentation License and uses material adapted in whole or in part from the Wikipedia article on Don Paterson.