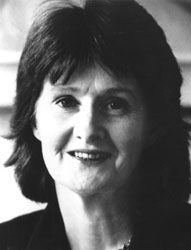 Boland was born in Dublin. Her father was a career diplomat and she was educated in London and New York as well as in her native city, graduating from Trinity College.

Her first books, In Her Own Image (1980) and Night Feed (1982), established her reputation as a writer on specifically feminist themes and on the difficulties faced by women poets in a male-dominated literary world.

Her publications also include An Origin Like Water: Collected Poems 1967-1987 (1996), Outside History: Selected Poems 1980-1990 (1990) and a prose memoir Object Lessons: The Life of the Woman and the Poet in Our Time (1995). Her collection In a Time of Violence (1994) received a Lannon Award and was shortlisted for the T.S. Eliot Poetry Prize. All of her volumes of poetry have been Poetry Book Society Choices.

Boland has taught at a number of universities, including Trinity College, Dublin. She has also been writer in residence there, and at the National Maternity Hospital. She is professor of English at Stanford University and is married with two daughters.

Biography By: This article is licensed under the GNU Free Documentation License and uses material adapted in whole or in part from the Wikipedia article on Eavan Boland.

In a Time of Violence

That the Science of Cartography Is Limited (No Comments »)