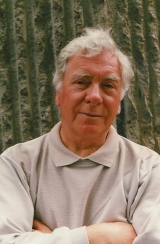 Edwin Brock (born 1927 in London, died 1997) was a British poet. Following two years that he spent in the Royal Navy shortly after the end of the Second World War he wrote Five Ways to Kill a Man, an emotionless poem highlighting stupid deaths and the harshness of war.

Biography By: This article is licensed under the GNU Free Documentation License and uses material adapted in whole or in part from the Wikipedia article on Edwin Brock.

Five Ways To Kill A Man (No Comments »)