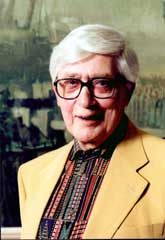 Professor Edwin Morgan (born April 27, 1920, died August 17, 2010) was a Scottish poet and translator associated with the British Poetry Revival. He is widely recognised as one of the foremost Scottish poets of the 20th century. He was the last survivor of the canonical ‘Big Seven’ (the others being Hugh MacDiarmid, Robert Garioch, Norman MacCaig, Iain Crichton Smith, George Mackay Brown, and Sorley MacLean).

Morgan was born in Glasgow and grew up in Rutherglen. He entered Glasgow University in 1937 and, after interrupting his studies to serve in World War II, graduated in 1947 and became a lecturer at the university. He worked at Glasgow University until his retirement in 1980.

Morgan has worked in a wide range of forms and styles, from the sonnet to concrete poetry. His Collected Poems appeared in 1990. He has also translated from a wide range of languages, including Russian, Hungarian, French, Italian, Latin, Spanish, Portuguese and German. Many of these are collected in Rites of Passage. Selected Translations (1976).

In 1999, Morgan was made the first Glasgow Poet Laureate. In 2004, he was named as the first Scottish national poet: The Scots Makar.

He also features on the Idlewild album The Remote Part on the final track Scottish Fiction.

Biography By: This article is licensed under the GNU Free Documentation License and uses material adapted in whole or in part from the Wikipedia article on Edwin Morgan.