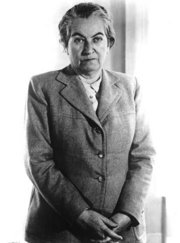 Gabriela Mistral was the pseudonym of Lucila de María del Perpetuo Socorro Godoy Alcayaga (April 7, 1889 – January 10, 1957), Chilean poet, educator, diplomat and feminist, winner of the Nobel Prize for Literature in 1945. The central themes in her poems are love, a mothers love, painful personal memories and sorrow and recovery.

Gabriela Mistral was born in Vicuña, where she attended primary and secondary school. Her father Juan Gerónimo Godoy Villanueva abandoned the family when she was three years old. Aged fourteen, she started to support herself and her mother by working as a teachers aide. Her mother, Petronila Alcayaga, died in 1929 – Gabriela dedicated the first section of the book Tala (Tree Fall) to her.

In 1906, while working as a teacher, she met Romeo Ureta, a railway worker, who killed himself in 1909. The profound effects of death were already in the poet’s work; writing about his suicide led the poet to consider death and life more broadly than previous generations of Latin American poets. Mistral had passionate friendships with a number of men and women, and these impacted her writings.

Formal recognition came on December 12, 1914, when she was awarded first prize in a national literary contest “Juegos Florales” in Santiago, with the work Sonetos de la Muerte (Sonnets of Death). From that moment on she began using the pen name Gabriela Mistral in almost all of her writings. She formed the name from the two of her favorite poets, Gabriele D’Annunzio and Frédéric Mistral.

In 1922 she was invited to Mexico by that country’s Minister of Education, as part of a plan to reform libraries and schools, to start a national education system. That year she published Desolación which won her international acclaim. A year later she published Lecturas para Mujeres (Readings for Women), a text in prose and verse that celebrates motherhood, childhood education, and nationalism.

Back in Chile, she was given the academic title of Spanish Professor by the University of Chile.

Her international stature led to lectures first in the United States and then in Europe. In 1924, travelling to Europe for the first time, she published Ternura (Tenderness) in Madrid, a collection of lullabies and rondas written primarily for children but often focused on the female body.

The following year she returned to Latin America and toured Brazil, Uruguay and Argentina. Back in Chile, she was given a pension and retired from teaching.

She lived primarily in France and Italy between 1925 and 1934. During these years she worked for the League for Intellectual Co-operation of the League of Nations. She also taught at Barnard College of Columbia University, Vassar College and the University of Puerto Rico.

In common with many Latin American artists and intellectuals, Mistral served as a Chilean consul from 1932 until her death, working in Naples, Madrid, Petrópolis, Nice, Lisbon, Los Angeles, Santa Barbara, Veracruz, Mexico, Rapallo and Naples, Italy, and New York. She published hundreds of articles in magazines and newspapers throughout the Spanish-speaking world.

Tala appeared in 1938, published in Buenos Aires with the help of longtime friend and correspondent Victoria Ocampo. The proceeds for the sale were devoted to children orphaned by the Spanish Civil War. This volume includes many poems celebrating the customs and folklore of Latin America as well as Mediterranean Europe. Mistral uniquely fuses these locales and concerns, a reflection of her identification as “una india vasca,” her Basque-Indian background.

In August 14, 1943 her 17 year old nephew Juan Miguel killed himself. This caused her enormous grief since she had raised him as if he were her own son. The grief of this death, as well as her responses to tensions of the Cold War in Europe and the Americas, are the subject of the last volume of poetry published in her lifetime, Lagar, which appeared in 1954. A final volume of poetry, Poema de Chile, was edited posthumously by her friend Doris Dana, and published in 1967. Poema de Chile describes the poet’s return to Chile after death, in the company of an Indian boy from the Atacama desert, and an andean deer, the huemul.

In November 15, 1945, she became the first Latin American woman to receive the Nobel Prize for Literature. She received the award in person from King Gustav of Sweden on December 10, 1945. In 1947 she received a doctor honoris causa from Mills College, Oakland, California. In 1951 she was awarded the long overdue National Literature Prize in Chile.

Poor health eventually slowed her traveling. During the last years of her life she made her home in New York, where she died from cancer in Long Island on January 10, 1957, aged sixty-seven. Her remains were returned to Chile nine days later. The Chilean government declared three days of national mourning, and hundreds of thousands of Chileans came to pay her their respects.

Biography By: This article is licensed under the GNU Free Documentation License and uses material adapted in whole or in part from the Wikipedia article on Gabriela Mistral.