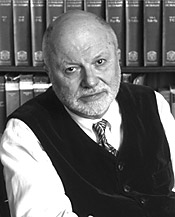 Geoffrey Hill (b. June 18, 1932, d. June 30, 2016) – British poet, Professor of English Literature and Religion, and co-director of the Editorial Institute at Boston University.

Geoffrey Hill was born in Bromsgrove, Worcestershire in 1932. When he was six, his family moved to nearby Fairfield, where he attended the local primary school, then the grammar school in Bromsgrove. In 1950 he was admitted to Keble College, Oxford to read English, where he published his first poems in 1952, at the age of twenty, in an eponymous Fantasy Press volume edited by Donald Davie.

After graduating from Keble, Hill embarked on an academic career, teaching at the University of Leeds from 1954 until 1980. After leaving Leeds, he spent a year at the University of Bristol on a Churchill Scholarship before becoming a teaching Fellow at Emmanuel College, Cambridge, where he taught from 1981 until 1988. He then moved to the United States, to take up the position he currently holds as University Professor and Professor of Literature and Religion at Boston University. He returns to England frequently.

Geoffrey Hill is widely considered one of the most distinguished poets of his generation. Mercian Hymns (1971) is one of his most widely read books, a series of thirty poems which juxtapose the history of Offa, eighth century ruler of the Anglo-Saxon kingdom of Mercia, with Hill’s own childhood in the modern Mercia of the West Midlands.

Biography By: This article is licensed under the GNU Free Documentation License and uses material adapted in whole or in part from the Wikipedia article on Geoffrey Hill.