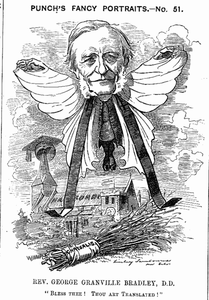 George Granville Bradley (December 11, 1821 – March 13, 1903), was an English divine and scholar. His father, Charles Bradley, was vicar of Glasbury, Brecon.

He was educated at Rugby under Thomas Arnold, and at University College, Oxford, of which he became a Fellow in 1844. He was an assistant master at Rugby from 1846 to 1858, when he succeeded GEL Cotton as Headmaster at Marlborough.

In 1870 he was elected master of his old college at Oxford, and in August 1881 he was made Dean of Westminster in succession to AP Stanley, whose pupil and intimate friend he had been, and whose biographer he became.

Besides his Recollections of A. P. Stanley (1883) and Life of Dean Stanley (1892), he published Aids to writing Latin Prose Composition and Lectures on Job (1884) and Ecclesiastes (1885). He took part in the coronation of Edward VII and resigned the deanery in 1902.

The writer Margaret Louisa Woods was his daughter.

At The Other End Of The Telescope (No Comments »)