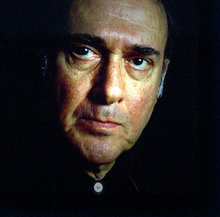 Harold Pinter, CH, CBE (born October 10, 1930, died 24 December 2008) was a British playwright and theatre director. He wrote for theatre, radio, television and film. He was awarded the Nobel Prize in Literature in 2005.

Pinter was born in Hackney in London to working class Jewish parents. He was educated at Hackney Downs Grammar School and, briefly, at the Royal Academy of Dramatic Art (RADA). He published poetry as a young man.

Pinter began working in the theatre as an actor, under the stage name David Baron. His first play, The Room, was first performed by Bristol University students in 1957.

His second play (which is today one of his best-known), The Birthday Party (1958), was initially a flop, despite a positive review in the Sunday Times by leading theatre critic Harold Hobson. But after the success of The Caretaker in 1960, which established him, The Birthday Party was revived, and this time was well received.

These plays, and other early works such as The Homecoming (1964), have sometimes been labelled as displaying the “comedy of menace”. They often take an apparently innocent situation, and reveal it as a threatening and absurd one because of characters acting in ways which may seem inexplicable both to the audience and, at times, to other characters. Pinter’s work was marked by the influence of Samuel Beckett from the earliest works onwards, and the two men became long-standing friends.

Pinter began to direct more frequently during the 1970s, becoming an associate director of the National Theatre in 1973. His later plays tend to be shorter, often appearing as allegories of oppression. He was nominated for an Oscar for best adapted screenplay twice (“The French Lieutenant’s Woman” -1981 and “Betrayal” -1983.)

In January 2005 he announced that he was retiring from writing plays to dedicate himself to political campaigning. Pinter was appointed CBE in 1966 and became a Companion of Honour in 2002 (having previously declined a knighthood in 1996).

On October 13, 2005 the Swedish Academy announced Pinter was the recipient of the 2005 Nobel Prize in Literature, stating that, “in his plays [he] uncovers the precipice under everyday prattle and forces entry into oppression’s closed rooms”. Pinter, ailing from throat cancer, could not attend the Nobel Prize awards ceremony in Sweden, and chose instead to deliver his laureate lecture via satellite link on December 7, 2005. Speaking with obvious difficulty, and seated in a wheelchair, he attacked the United States and Great Britain over the Iraq war, and demanded war crimes prosecution of Tony Blair and George W Bush. Video excerpts from the lecture are available via this page from the British BBC. See also external links.

Pinter served as the chairman of the Gaieties Cricket Club, and as an Honorary Associate of the National Secular Society.

On October 13, 2005 (the day his Nobel Prize was announced) Pinter was erroneously reported dead on a cable television channel. (This may have been because he has been suffering from cancer for several years, and also injured his head in a fall shortly before the report.)

Biography By: This article is licensed under the GNU Free Documentation License and uses material adapted in whole or in part from the Wikipedia article on Harold Pinter.