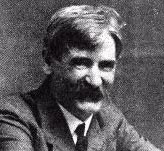 His mother was Louisa Lawson 1848 – 1920, a prominent suffragist and owner/editor of The Dawn journal which was partly responsible for Australia becoming one of the first countries to attain adult female suffrage. His father was Niels Larsen, a Norwegian seaman who settled in Australia; on Henry’s birth, the family surname was anglicised and Niels became Peter Lawson.

Henry suffered an ear infection at the age of seven that left him with partial deafness and by the age of fourteen he had lost his hearing entirely. Most of his works focuses on the Australian bush, such as the desolate Past Carin‘, and is considered by some to be among the first accurate descriptions of Australian life as it was at the time. It should be noted, however, that even then the majority of Australians lived in cities like Lawson himself; the bush that Lawson depicted housed only a small minority.

During his later life, the alcohol-addicted writer was probably Australia’s best-known celebrity. At the same time, he was also a frequent beggar on the streets of Sydney, notably at the Circular Quay ferry turnstiles. He was gaoled at Darlinghurst Gaol for drunkenness and non payment of alimony, and recorded his experience in the haunting poem “One Hundred and Three” – his prison number- which was published in 1908. He refers to the prison as “Starvinghurst Gaol” because of the meagre rations given to the inmates.

At his death he was given a state funeral, attended by the Prime Minister W. M. Hughes and Lawson’s brother-in-law, Jack Lang, the Premier of the State of New South Wales, as well as thousands of citizens.

Biography By: This article is licensed under the GNU Free Documentation License and uses material adapted in whole or in part from the Wikipedia article on Henry Lawson.