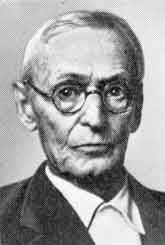 Hermann Hesse (July 2, 1877 – August 9, 1962) was a German author, and the winner of the 1946 Nobel Prize in literature. He is most famous for his novels Steppenwolf and Das Glasperlenspiel (The Glass Bead Game).

Hesse’s interests in existential, spiritual, and mystical themes and Buddhist and Hindu philosophy may be seen in his works. Born on July 2, 1877 in Calw, Württemberg, Hesse emigrated to Switzerland in 1912 and in 1923 became a Swiss citizen.

A staunch pacifist, Hesse opposed World War I strongly. The residual fallout of his feelings towards war can be seen in many of his books. During World War II his writings found strange allies. The German propagandist Joseph Goebbels initially defended Hesse’s books, and as a result he was allowed to continue writing unmolested. However, after he demanded that certain portions in his book Narcissus and Goldmund dealing with pogroms be left untouched, he found himself on the Nazis’ blacklist. Despite this ominous situation Hesse escaped World War II unharmed.

Like a number of his characters, Hesse had many problems throughout his life with women. His first marriage with Maria Bernoulli, with whom he had three children, ended sadly, his wife having mental problems. His second marriage was apparently a brief fling with Ruth Wenger, lasting only a few months. He finally married Ninon Dolbin in 1931 and remained with her for the rest of his life.

He developed a certain conservatism in his later life—in Das Glasperlenspiel, characters denounce all music after Johann Sebastian Bach as superficial and bad, with Ludwig van Beethoven being an extreme example of bad taste.

Das Glasperlenspiel, with its William Morris-like idealised medieval style was extremely popular in the war-torn Germany of 1945. He died of cerebral hemorrhage in his sleep in Montagnola at the age of 85.

Biography By: This article is licensed under the GNU Free Documentation License and uses material adapted in whole or in part from the Wikipedia article on Hermann Hesse.