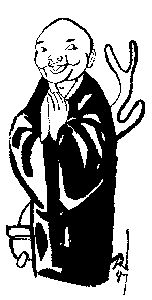 Hồ Xuân Hương (1772-1822) (read as Hû Chūnxiāng in Mandarin) was a Vietnamese poet born at the end of the Later Lê Dynasty who wrote poetry in chữ nôm. She is considered one of Vietnam’s greatest poets, such that she is dubbed “the Queen of nôm Poetry” by a prominent modern Vietnamese poet.

The facts of her life are difficult to obtain. Being a concubine (“like the maid/but without the pay”) in a Confucian society, her works show her to be an independent-minded woman who resisted against societal norms. Her poems are usually irreverent, full of double entendres, but erudite. Her choosing to compose her works in Nôm instead of in classical Chinese (along with her contemporary Nguyễn Du) contributed to its prominence in the 18th century.

Biography By: This article is licensed under the GNU Free Documentation License and uses material adapted in whole or in part from the Wikipedia article on Ho Xuan Huong.

The Jackfruit (No Comments »)