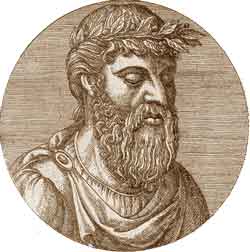 Two epic poems are attributed to Homer, The Iliad and The Odyssey. They are composed in a literary type of Greek, Ionic in basis with Aeolic admixtures. Ranked among the great works of Western literature, these two poems together constitute the prototype for all subsequent Western epic poetry.

The “Homeric question” was the great dispute of scholarship in the 19th century. Scholars tried to analyze the two works by various tests, usually to show that they were strung together from older narrative poems. Recent evidence strongly suggests that the Iliad is the work of a single poet. Modern scholars are generally agreed that there was a poet named Homer who lived before 700 B.C., probably in Asia Minor, and that the Iliad and the Odyssey are each the product of one poet’s work, developed out of older legendary matter. Some assign the Odyssey to a poet who lived slightly after the author of the Iliad.

Legends about Homer were numerous in ancient times. He was said to be blind. His birthplace has always been disputed, but Chios or Smyrna seem most likely. The study of Homer was required of all Greek students in antiquity, and his heroes were worshiped in many parts of Greece. The Iliad and the Odyssey are composed in dactylic hexameter and are of nearly the same length. The Homeric Hymns were falsely attributed to Homer.

Divided into 24 books, the Iliad tells of the wrath of Achilles and its tragic consequences, an episode in the Trojan War. The action is in several sections. Achilles quarrels with Agamemnon over possession of the captive woman Briseis, and Achilles retires from the war to sulk in his tent. The Greek position gradually weakens until Agamemnon offers amendment to Achilles (Books I-IX). Book X tells of an expedition by Odysseus and Diomedes leading to Greek reverses in the war. Thereupon Patroclus, Achilles’ friend, is inspired to go into battle wearing Achilles’ armor. He is killed by Hector (Books XI-XVII).

Book XVIII tells of the visit of Thetis, mother of Achilles, to comfort her grieving son and of the forging of new armor by Hephaestus for Achilles. Achilles then determines to avenge his friend, kills Hector, buries Patroclus, and finally, at the entreaty of Priam, gives Hector’s body to the Trojan hero’s aged father (Books XIX-XXIV). The Iliad is a highly unified work, splendid in its dramatic action. Written in a simple yet lofty style, it contains many perceptive characterizations that make exalted personages like Hector and Achilles believable as human beings.

The Odyssey is written in 24 books and begins nearly ten years after the fall of Troy. In the first part, Telemachus, Odysseus’ son, visits Nestor at Pylos and Menelaus at Sparta, seeking news of his absent father. He tells them of the troubles of his mother, Penelope, who is beset by mercenary suitors. Menelaus informs him that his father is with the nymph Calypso (Books I-IV). The scene then shifts to Mt. Olympus with an account of Zeus’ order to Calypso to release Odysseus, who then builds a raft and sails to Phaeacia. There he is entertained by King Alcinoüs and his daughter Nausicaä; he relates to them the story of his wanderings in which he has encountered Polyphemus, Aeolus, Circe, Scylla and Charybdis, the Sirens, the Laestrygones, and the lotus-eaters (Books V-XII).

Dramatic tension mounts with the return of Odysseus and Telemachus to Ithaca; together they plan and execute the death of the suitors. Afterward Odysseus makes himself known to his wife and his father, with whose aid he repulses the suitors’ angry kinsmen. Athena intervenes, peace is restored, and Odysseus once again rules his country (Books XIII-XXIV). The atmosphere of adventure and fate in the Odyssey contrasts with the heavier tone and tragic grandeur of the Iliad.