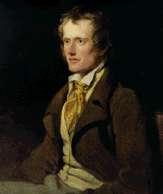 John Clare (July 13, 1793 – May 20, 1864), English poet, commonly known as “the Northamptonshire Peasant Poet,” the son of a farm labourer, was born at Helpston near Peterborough.

At the age of seven he was taken from school to tend sheep and geese; four years later he began to work on a farm, attending in the evenings a school where he is said to have learned. He then became a pot-boy in a public-house and fell in love with Mary Joyce, but her father, a prosperous farmer, forbade her to meet him. Subsequently he was gardener at Burghley Park. He enlisted in the militia, tried camp life with gypsies, and worked as a lime burner in 1817, but in the following year he was obliged to accept parish relief.

Clare had bought a copy of Thomson’s Seasons out of his scanty earnings and had begun to write poems.
In 1819 a bookseller at Stamford, named Drury, discovered one of Clare’s poems, The Setting Sun, written on a scrap of paper enclosing a note to his predecessor in the business. He befriended the author and introduced his poems to John Taylor, of the publishing firm of Taylor & Hussey, which issued the Poems Descriptive of Rural Life and Scenery in 1820. This book was highly praised, and in the next year his Village Minstrel and other Poems were published.

He was greatly patronized; fame, in the shape of curious visitors, broke the tenor of his life, and the convivial habits that he had formed were indulged more freely. He had married in 1820, and an annuity of 15 guineas from Lord Exeter, in whose service he had been, was supplemented by subscription, and he became possessed of £45 annually, a sum far beyond what he had ever earned, but new wants made his income insufficient, and in 1823 he was nearly penniless. The Shepherd’s Calendar (1827) met with little success, which was not increased by his hawking it himself. As he worked again on the fields his health temporarily improved; but he soon became seriously ill. Lord Fitzwilliam presented him with a new cottage and a piece of ground, but Clare could not settle in his new home. Gradually his mind gave way.

His last and best work, the Rural Muse (1835), was noticed by “Christopher North” alone. He had for some time shown symptoms of insanity, and in July 1837 he was removed to a private asylum, and afterwards to the Northampton general lunatic asylum where he died on the 20th of May 1864.

Clare’s descriptions of rural scenes show a keen and loving appreciation of nature, and his love-songs and ballads charm by their genuine feeling; but his vogue was no doubt largely due to the interest aroused by his humble position in life.

Biography By: This article is licensed under the GNU Free Documentation License and uses material adapted in whole or in part from the Wikipedia article on John Clare.

The Nightingale’s Nest (No Comments »)