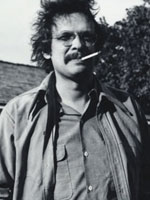 Jon Anderson grew up outside of Boston and lived there his first twenty years. Since 1976 he lived in Tucson, where he taught at the University of Arizona. He published six collections of poems including Day Moon (Carnegie Mellon, 2001), The Milky Way, and In Sepia. He received, among other awards, a Guggenheim Fellowship, two National Endowment for the Arts Fellowships, and the Shelley Memorial Award for lifetime achievement from the Poetry Society of America.

Jon passed away at the age of 67 in October 2007 after a few weeks of illness.