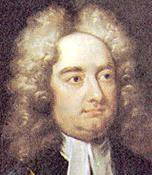 Jonathan Swift was born, after his father had been dead for seven months, to an English mother, and educated by his Uncle Godwin. After a not very successful career at Trinity College, Dublin, he went to stay with his mother, Abigail Erick, at Leicester.

Soon afterwards an opening to work for Sir William Temple presented itself. In 1689 Swift went to live at Moor Park, Surrey, where he read to Temple, wrote for him, and kept his accounts. Growing into confidence with his employer, he “was often trusted with matters of great importance.” Within three years of their acquaintance, Temple had introduced his secretary to William III, and sent him to London to urge the King to consent to a bill for triennial Parliaments.

When Swift took up his residence at Moor Park, he found there an eight-year-old little girl. She was the daughter of a merchant named Edward Johnson, who had died young. Swift says that Esther Johnson was born on March 18, 1681 — she was later known as Stella and would later feature largely in Swift’s life.

By 1694 Swift had grown tired of his position, and finding that Temple, who valued his services, was slow in finding him preferment, he left Moor Park in order to carry out his resolve to go into the Church. He was ordained, and obtained the prebend of Kilroot, near Belfast.

In May 1696 Temple induced Swift to return to Moor Park, where he was employed in preparing Temple’s memoirs and correspondence for publication. During this time Swift wrote The Battle of the Books, which was, however, not published until 1704. On his return to Temple’s house, Swift found his old playmate grown from a sickly child into a girl of fifteen, in perfect health.

In the summer of 1699 Swift was offered and accepted the post of secretary and chaplain to the Earl of Berkeley, one of the Lords Justices, but when he reached Ireland he found that the secretaryship had been given to another. He soon, however, obtained the living of Laracor, Agher, and Rathbeggan, and the prebend of Dunlavin in St. Patrick’s Cathedral, Dublin.

At Laracor, a mile or two from Trim, and twenty miles from Dublin, Swift ministered to a congregation of about fifteen persons, and had abundant leisure for cultivating his garden, making a canal (after the Dutch fashion of Moor Park), planting willows, and rebuilding the vicarage. As chaplain to Lord Berkeley, he spent much of his time in Dublin. When Lord Berkeley returned to England in April 1701, Swift, after taking his doctor’s degree at Dublin, went with him, and soon afterwards published, anonymously, a political pamphlet, A Discourse on the Contests and Dissentions in Athens and Rome.

When he returned to Ireland in September he was accompanied by Stella — now twenty years old — and her friend Mrs. Dingley. There’s a great deal of mystery and controversy over Swift’s relationship with Stella. Many hold that they were secretly married in 1716. Although there has never been definite proof of this, there is no doubt that she was dearer to him than anyone else, and that his feelings for her did not change throughout his life.

Swift was politically active between 1707 and 1710, successfully petitioning the English government on behalf of the Irish bishops for the surrender by the Crown of the First-Fruits and Twentieths, which brought in about 2500 pounds a year. As a result he became more and more intimate with the Tory leaders and increasingly cool towards his older acquaintances.

Swift received the reward of his services to the Government — the Deanery of St. Patrick’s, Dublin — in April 1713. Swift was back again in the political strife in London in September, taking Oxford’s part in the quarrel between that statesman and Bolingbroke. On the fall of the Tories at the death of Queen Anne, he saw that all was over, and retired to Ireland, not to return again for twelve years. In 1713 he co-founded the Scriblerus Club.

In 1723 Swift became engrossed in the Irish agitation which led to the publication of the Drapier’s Letters, and in 1726 he paid a long-deferred visit to London, taking with him the manuscript of Gulliver’s Travels.

On January 28, 1728, Stella died. Swift could not bear to be present, but on the night of her death he began to write his very interesting Character of Mrs. Johnson. He was too ill to be present at the funeral at St. Patrick’s, but afterwards, a lock of her hair was found in his desk, wrapped in a paper bearing the words, “Only a woman’s hair.”

Swift continued to produce pamphlets that reflected a growing misanthropy, epitomized by A Modest Proposal (1729), in which he “suggested” the Irish unburden themselves of their numerous children — and break the cycle of poverty in the process – by selling them to the rich as food! Despite his irony, however, he showed many kindnesses to people who needed help. He seems to have given Mrs. Dingley fifty guineas a year, pretending that it came from a fund for which he was trustee.

The mental decay which he had always feared — “I shall be like that tree,” he once said, “I shall die at the top” — became marked about 1738. Paralysis was followed by aphasia, and after acute pain, followed by a long period of apathy, from which death relieved him in October 1745. He was buried by Stella’s side, in accordance with his wishes. The bulk of his fortune was left to found a hospital for idiots and lunatics.

Biography By: This article is licensed under the GNU Free Documentation License and uses material adapted in whole or in part from the Wikipedia article on Jonathan Swift.