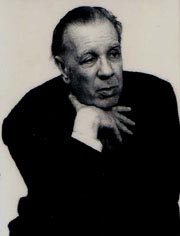 Jorge Luis Borges (August 24, 1899 – June 14, 1986) was an Argentine writer who is considered to be one of the foremost writers of the 20th century. A poet and an essayist, Borges is generally best-known for his short stories.

Borges was born in Buenos Aires. His father, Jorge Guillermo Borges, was
a lawyer and a psychology teacher, who also had literary aspirations (“he tried to become a writer and failed in the attempt,” Borges once said. “He composed some very good sonnets”). Borges’s mother, Leonor Acevedo Suárez, was a translator. His father’s family was part Italian, Spanish, Portuguese, and British; his mother’s Spanish, Catalan, and possibly Portuguese. At his home, both Spanish and English were spoken, so from earliest childhood Borges was effectively bilingual, and learned to read in English before Spanish. He grew up in the suburban neighborhood of Palermo in a large house with an extensive library.

Jorge Guillermo Borges was forced into early retirement from the legal profession owing to the same failing eyesight that would eventually afflict his son, and in 1914, the family moved to Geneva, where Borges senior was treated by a Geneva eye specialist while Borges and his sister Norah (born 1902) attended school. There Borges learned French, which he apparently had initial difficulties
with, and taught himself German, receiving his BA from the Collège of Geneva in 1918.

After World War I ended, the Borges family spent three years in Lugano, Barcelona, Majorca, Sevilla, and Madrid. In Spain, Borges became a member of the avant-garde Ultraist literary movement. His first
poem, “Hymn to the Sea,” written in the style of Walt Whitman, was published in the magazine recia (Spanish: Greece).

In 1921, Borges returned with his family to Buenos Aires where he imported the doctrine
of Ultraism and launched his career as a writer by publishing poems and essays in literary journals. Borges’s first collection of poetry was Fervor de Buenos Aires (1923). He contributed to the avant-garde review Martín Fierro (whose “art for art’s sake” approach contrasted to that of the more politically-involved Boedo group), co-founded the journals Prisma (1921 – 1922, a broadsheet distributed largely by pasting copies to walls in Buenos Aires) and Proa (1922 – 1926). He was, from the first issue, a regular contributor to Sur, founded in 1931, by Victoria Ocampo, which became Argentina’s most important literary journal. Ocampo herself introduced Borges to Adolfo Bioy Casares, who was to become Borges’s frequent collaborator and Ocampo’s brother-in-law, and another well-known figure of Argentine literature.

In 1933 Borges was appointed editor of the literary supplement of the newspaper Crítica, and it was there that the pieces later published in Historia universal de la infamia (A Universal History of Infamy) appeared. These pieces lay somewhere between non-fictional essays and fictional short stories, using fictional techniques to tell essentially true stories, and literary forgeries, which typically claimed to be translations of passages from famous but seldom read works. In the following years, he served as a literary adviser for the publishing house Emecé Editores and wrote weekly columns for El Hogar, which appeared from 1936 to 1939.

Borges’s father died in 1938, a great blow because the two were very close. At New Year’s 1939, Borges suffered a severe head wound in an accident; during treatment for that wound, he nearly died of blood poisoning. While recovering from the accident, he began writing in a style he became famous for, and his first collection of short stories, El jardín de senderos que se bifurcan (The Garden of Forking Paths) appeared in 1941. The book included ‘El sur’, a piece that incorporated some autobiographical elements, notably the accident, and which the writer regarded as his personal favorite. Though generally well received, El jardín de senderos que se bifurcan failed to garner the literary prizes many in his circle expected for it. Ocampo dedicated a large portion of the July 1941 issue of Sur to a “Reparation for Borges”; numerous leading writers and critics from Argentina and throughout the Spanish-speaking world contributed writings to the project.

Starting in 1937, Borges began working at the Miguel Cané branch of the Buenos Aires
Municipal Library as a first assistant. When Juan Perón came to power in 1946 he was effectively fired, being “promoted” to the position of “Poultry and Rabbit Inspector” for the Buenos Aires municipal market (which he immediately resigned). His offenses against the Peronistas up to that time had apparently consisted of little more than adding his signature to pro-democratic petitions, but shortly after his resignation he addressed the Argentine Society of Letters saying, in his characteristic style, “Dictatorships foster oppression, dictatorships foster servitude, dictatorships foster cruelty; more abominable is the fact that they foster idiocy.”

Left without a job, his vision beginning to fade, and unable to fully support himself as a writer, Borges began a new career as a public lecturer. Despite a certain amount of political persecution, he was reasonably successful, and became an increasingly public figure, obtaining appointments as President (1950 – 1953) of the Argentine Society of Writers and as Professor of English and American Literature (1950 – 1955) at the Argentine Association of English Culture. His short story Emma Zunz was turned into a film (under the name of Días de odio, which in English became Days of Wrath) in 1954 by Argentine director Leopoldo Torre Nilsson. Around this time, Borges also began writing screenplays.

In 1955, and after the initiative of Ocampo, the new anti-Peronist military government appointed him head of the National Library. By that time, he had become fully blind, like his predecessor at the National Library. Neither coincidence nor the irony escaped Borges and he commented on them in his work:

The following year he received the National Prize for Literature and the first of many honorary doctorates, this one from the University of Cuyo (Argentina). From 1956 to 1970, Borges also held a position as a professor of literature at the University of Buenos Aires, while frequently holding temporary appointments at other universities.

Being unable to read and write, he relied on his mother, with whom he had always been personally close, and who began to work with him as his personal secretary.

Borges’s international fame dates approximately from the early 1960s. In 1961, he received the Formentor Prize, which he shared with Samuel Beckett; the Italian government named him Commendatore; and the University of Texas at Austin appointed him for one year to the Tinker chair. This led to his first lecture tour of the United States. The first translations of his work into English were to follow in 1962, with lecture tours of Europe and the Andean region of South America in
subsequent years. In 1965, the United Kingdom granted him an O.B.E. Dozens of other honors were to accumulate over the years.

In 1967, Borges began a five-year period of collaboration with the American translator
Norman Thomas di Giovanni, thanks to which became better known in the English-speaking world. He also continued to publish books, among them El libro de los seres imaginarios(The Book of Imaginary Beings, 1967), El informe de Brodie (Dr. Brodie’s Report, 1970), and El libro de arena (The Book of Sand, 1975). He also lectured prolifically. Many of these lectures were gathered in volumes such as Siete noches (Seven Nights) and Nueve
ensayos dantescos.

When Perón returned from exile and was re-elected president in 1973, Borges resigned as
director of the National Library.

In 1975, after the death of his mother, Borges started his series of visits to countries all over the world, and continued traveling until his death.

Borges was married twice. In 1967 he married an old friend, the recently widowed Elsa Astete Millán. The marriage lasted three years. After the divorce, Borges moved back in with his mother. During his last years, Borges lived with María Kodama, with whom he had been studying Anglo-Saxon for a number of years, and who also served as his personal secretary. In 1984, they produced an account of their journeys in different places of the world under the name Atlas, with text by Borges and photographs by Kodama. They married in 1986, months before his death.

Borges died of liver cancer in Geneva in 1986, having chosen to return at the end of his life to the city in which he had studied as an undergraduate. He was buried in the Cimetière des Rois.

Biography By: This article is licensed under the GNU Free Documentation License and uses material adapted in whole or in part from the Wikipedia article on Jorge Luis Borges.