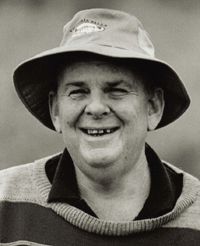 Leslie Allan Murray, born 1938 in Nabiac, a village on the north coast of New South Wales, Australia, was an Australian poet and essayist who in such meditative, lyrical poems as “Noonday Axeman” and “Sydney and the Bush” captured Australia’s psychic and rural landscape as well as its mythic elements.

The Butter Factory (No Comments »)

An Absolutely Ordinary Rainbow (No Comments »)

Poems the Size of Photographs

Translations from the Natural World