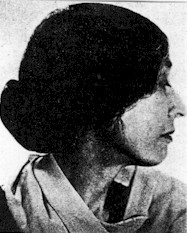 Lola Ridge (December 12, 1873 – May 19, 1941) was an anarchist poet and an influential editor of avant-garde, feminist, and Marxist publications best remembered for her long poems and poetic sequences. She, along with other political poets of the early Modernist period, has been coming under increasing critical scrutiny at the beginning of the twenty-first century.

Ridge was born in Dublin, grew up in New Zealand and Australia, and moved to the United States in 1907. Her first book, The Ghetto and Other Poems was published in 1918. The title poem portrays the Jewish community of Hester Street New York, and deals with the effects of capitalism, gender conflict and conflicts between generations on this immigrant community in ways that bear comparison to the works of Charles Reznikoff. The book was a critical success and led to her involvement with avant-garde magazines such as Others and Broom. Ridge went on to publish four more books of poetry.

Although never a member of any political party, she protested against the execution of Sacco and Vanzetti in 1927, for which she was arrested. She also supported Tom Mooney, and Warren Billings, who had been framed for a bombing at the Preparedness Day Parade in San Francisco in 1916. Her third book, Red Flag 1927 collected much of her political poetry.

Biography By: This article is licensed under the GNU Free Documentation License and uses material adapted in whole or in part from the Wikipedia article on Lola Ridge.

Sun-Up and Other Poems

The Dream (No Comments »)