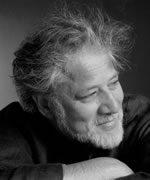 Michael Ondaatje is a Canadian author. Born in Sri Lanka (formerly Ceylon) of Dutch-Tamil-Singhalese origin, in 1954 he moved to England with his mother. His brother Christopher Ondaatje is a noted figure and philanthropist in the United Kingdom.

After relocating to Canada in 1962, Ondaatje became a Canadian citizen. Ondaatje received his BA from the University of Toronto and his MA from Queen’s University in Kingston, Ontario. In the mid-1960s he settled in Toronto, from 1971 to 1983 he taught at York University and since then at Glendon College in Toronto.

His style of fiction introduced in In the Skin of a Lion and mastered in The English Patient is non-linear. He creates a narrative by exploring many interconnected snapshots in great detail.

Although he is best known as a novelist, Ondaatje’s work also encompasses memoir, poetry, and film. Besides his memoir of his Sri Lankan childhood, Running in the Family, and his Governor General’s Award winning book of poetry, There’s a Trick With a Knife he is known for four works of fiction:

In 1988 he was made an Officer of the Order of Canada. His older brother Christopher Ondaatje is a multi-millionaire financier and author of travel books.

Biography By: This article is licensed under the GNU Free Documentation License and uses material adapted in whole or in part from the Wikipedia article on Michael Ondaatje.