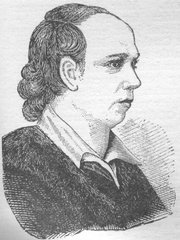 He was the son of an Anglican cleric and grew up in Athlone in Ireland. He earned his Bachelor of Arts in 1749 at Trinity College, Dublin, studying theology and law but never getting as far as ordination. He later studied medicine at the University of Edinburgh and the University of Leiden, then toured Europe, living on his wits. On his return, he settled in London, where he worked as an apothecary’s assistant. Perennially in debt, Goldsmith had a massive output as a hack writer for the publishers of London, but his few painstaking works earned him the company of Samuel Johnson, along with whom he was a founding member of “The Club.”

He was buried in Temple Church. There is a monument to him in Westminster Abbey with an epitaph written by Samuel Johnson.

Goldsmith’s birth date is not known for certain. According to the Library of Congress authority file, he told a biographer that he was born on November 29, 1731 or perhaps 1730. Other sources have indicated November 10, on any year from 1727 to 1731. November 10, 1730 is now the most commonly accepted birth date, according to the Encyclopedia Britannica.

Biography By: This article is licensed under the GNU Free Documentation License and uses material adapted in whole or in part from the Wikipedia article on Oliver Goldsmith.