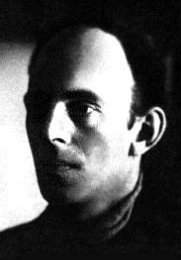 Mandelstam was born in Warsaw, to a wealthy Jewish family. His father, a tanner by trade, was able to receive a dispensation freeing the family from the pale of settlement, and soon after Osip’s birth they moved to Saint Petersburg. In 1900 Mandelstam entered a prestigious Tenishevsky school, which also counts Vladimir Nabokov and other significant figures of Russian (and Soviet) culture among its alumni. His first poems were printed in the school’s almanac in 1907.

Mandelstam’s poetry, acutely populist in spirit after the first Russian revolution, became closely associated with symbolist imagery, and in 1911 he and several other young Russian poets formed “Poets’ Guild” (Russian: Цех Поэтов, Tsekh Poetov), under the formal leadership of Nikolai Gumilyov and Sergei Gorodetsky. The nucleus of this group would then become known as Acmeists. Mandelstam had authored the manifesto for the new movement – The Morning Of Acmeism (1913, published in 1919). 1913 also saw the publication of the first collection of poems, The Stone (Russian: Камень, Kamyen), to be reissued in 1916 in a greatly expanded format, but under the same title.

In 1922 Mandelstam arrived in Moscow with his newly wed wife Nadezhda. At the same time his second book of poems, Tristia, was published in Berlin. For several years after that, he almost completely abandoned poetry, concentrating on essays, literary criticism, memoirs (The Din Of Time, Russian: Шум времени, Shum vremeni; Feodosia – both 1925) and small-format prose (The Egyptian Stamp, Russian: Египетская марка, Yegipetskaya marka – 1928). As a day job, he translated (19 books in 6 years), then worked as a correspondent for a newspaper.

Mandelstam’s non-conformist, anti-establishment tendencies always simmered not far from the surface, and in the autumn of 1933 they broke through in form of the famous “Stalin Epigram” (“Мы живем, под собою не чуя страны…”: “We live, not feeling the land beneath us…”). The poem, sharply criticising the “Kremlin mountaineer”, was described elsewhere as a “sixteen line death sentence”, likely prompted by Mandelstam’s seeing (in the summer of that year, while vacationing in Crimea) the effects of the Great Famine, a result of Stalin’s collectivisation in the USSR and his drive to exterminate the “kulaks”. Six months later Mandelstam was arrested.

However, after the customary pro forma inquest he not only was spared his life, but the sentence did not even include labor camps – a miraculous event, usually explained by historians as owing to Stalin’s personal interest in his fate. Mandelstam was to be banished from the largest cities, but otherwise allowed to choose his new place of residence. His wife joined him in Voronezh.

This was a temporary reprieve. In the coming years, Mandelstam would (as was expected of him) write several poems which seemed to glorify Stalin (including Ode To Stalin), but in 1937 the literary establishment began the systematic assault on him in print, first locally and soon after that from Moscow, accusing him of harboring anti-Soviet views. Early next year Mandelstam and his wife received a government voucher for a vacation not far from Moscow; upon arrival he was promptly arrested again.

Four months later Mandelstam was sentenced to hard labor. He arrived at transit camp near Vladivostok and managed to pass on a note to his wife back home with a request for clothes, which he never received. The official cause of his death is an unspecified illness.

Nadezhda Mandelstam presented her account of the events surrounding her husband’s life in Hope against Hope (ISBN 1860466354) and later continued with Hope Abandoned (ISBN 0689105495).

Biography By: This article is licensed under the GNU Free Documentation License and uses material adapted in whole or in part from the Wikipedia article on Osip Mandelstam.