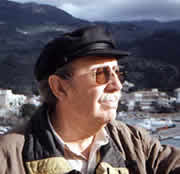 According to the Mexican government, Marcos’ real name is Rafael Guillén. Guillén studied high school in a jesuit institute in Tampico. Later he moved to Mexico City where he graduated from UAM Metropolitan Autonomous University, then received a masters degree in philosophy at UNAM National Autonomous University of Mexico and began work as a professor at UAM. After that he left to begin his revolutionary activity. While Marcos always denied being Rafael Guillén, Guillén’s family doesn’t know what happened to him, and they won’t say if they think Marcos and Rafael are the same person. During the Great March to Mexico City in 2001, Marcos visited the UAM and during his speech he made clear that he had at least been there before.

Like many of his generation he was radicalised by the events of 1968 and became a militant in a Maoist organisation. However, the encounter with the outlook of the indigenous peasants of Chiapas transformed the Zapatistas’ ideology, and Marcos has embraced an approach to social revolution that has been described by some as post-modernist; others argue that his philosophies and actions are more closely related to the revisionist marxist ideals of Antonio Gramsci that were popular in Mexico during his time in University.

A famous idol for Marcos is the Argentinian revolutionary Ernesto “Che” Guevara, important militant in the Cuban Revolution.

Much of his writings — articles, poems, speeches and letters — have been compiled into a book: Our Word is Our Weapon.

Sandy McKinney has been writing poetry for fifty years, translating Spanish poetry for forty or so of them.