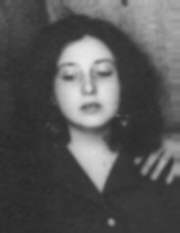 Regina Derieva was born in Odessa, Ukraine, in 1949. She authored over twenty books of poems, prose and essays.

From 1965 until 1991 she lived and worked in Karaganda, Kazakhstan. She graduated from university with majors in music and Russian philology and literature. A poet since the age of 15, she published books which were heavily censured by the then Soviet authorities, but nonetheless (at the request of other writers) became a member of the Union of Soviet Writers. In 1990 she was baptised into the Roman Catholic Church, and following further censure and oppression from the authorities, she emigrated to Israel with her family.

Life was no easier in Israel for a declared Christian, and Regina and her family, deprived of Israeli citizenship, became virtual prisoners without official papers, unable to live an independent life or to leave the country. The family was cared for by religious institutions, whilst Regina’s husband Alexander set about making the series of recordings on which the Pilgrim’s Star label is based.

From The Last Island: To Lady Elisabeth Verreet (No Comments »)

Inland Sea and Other Poems (The Divine Art, South Shields 1999)

Modern Poetry in Translation, No.20

All My Life (No Comments »)

I Don’t Feel At Home Where I Am (No Comments »)