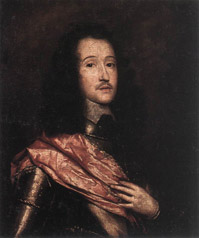 Richard Lovelace (1618 -1657 or 1658) was an English poet and nobleman, born in Woolwich, today part of southeast London. He was one of the cavalier poets, and a noted royalist.

He was imprisoned briefly in 1648 for supporting the Royalists during the time of Oliver Cromwell. He was best known for his poems To Althea, from Prison and To Lucasta, on Going to the Wars.

His most quoted excerpt is from the beginning of the last stanza of To Althea, From Prison:

Stone walls do not a prison make,
Nor iron bars a cage;
Minds innocent and quiet take
That for an hermitage

Biography By: This article is licensed under the GNU Free Documentation License and uses material adapted in whole or in part from the Wikipedia article on Richard Lovelace.