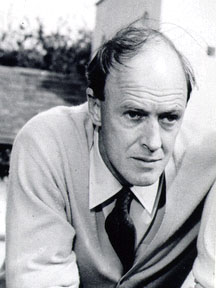 Roald Dahl (September 13, 1916 – November 23, 1990) was a British novelist and short story author of Norwegian descent, famous as a writer for both children and adults. Among his most popular books are Charlie and the Chocolate Factory, James and the Giant Peach, Matilda, The Witches and Kiss Kiss.

Inspired by a meeting with C. S. Forester, Dahl’s first published work was Shot Down Over Libya, a story about his wartime adventures, which was bought by the Saturday Evening Post for $1,000 and propelled him into a career as a writer.

His first children’s book was The Gremlins, about mischievous little creatures that were part of RAF folklore. The book was commissioned by Walt Disney for a film that was never made, and published in 1943. Eventually a “Gremlins” movie was made in 1984 by Steven Spielberg that was loosely based on Dahl’s creatures. Dahl went on to create some of the best-loved children’s stories of the 20th century, such as Charlie and the Chocolate Factory, Matilda and James and the Giant Peach.

He also had a successful parallel career as the writer of macabre adult short stories, usually with a dark sense of humour and a surprise ending. Many were originally written for American magazines such as Ladies Home Journal, Harper’s, Playboy and The New Yorker, then subsequently collected by Dahl into anthologies, gaining world-wide acclaim for the author. Dahl wrote more than 60 short stories and they have appeared in numerous collections, some only being published in book form after his death.

One of his more famous adult stories, The Smoker (also known as Man from the South), was filmed as an episode of Alfred Hitchcock Presents, and also adapted into Quentin Tarantino’s segment of the 1995 film Four Rooms. His short story collection Tales of the Unexpected was adapted to a successful TV series of the same name. A number of his short stories are supposed to be extracts from the diary of his (fictional) Uncle Oswald, a rich gentleman whose sexual exploits form the subject of these stories.

For a brief period in the 1960s Dahl wrote screenplays to make money. Two of his screenplays—the James Bond film You Only Live Twice and Chitty Chitty Bang Bang—were adaptations of novels by Ian Fleming, and he adapted his own work into Willy Wonka and the Chocolate Factory (1971).

Memories with Food at Gipsy House, written with his wife Felicity and published posthumously in 1991, is a mixture of recipes, family reminiscences and Dahl’s musings on favourite subjects such as chocolate, onions, and claret.

Many of his children’s books have illustrations by Quentin Blake.

Biography By: This article is licensed under the GNU Free Documentation License and uses material adapted in whole or in part from the Wikipedia article on Roald Dahl.