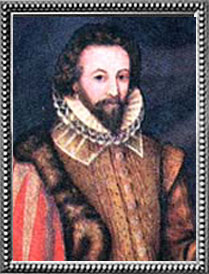 Sir Walter Raleigh (1554 – October 29, 1618) is famed as a writer, poet, spy, and explorer. Note: Many alternate spellings of his surname exist, including Rawley, Ralegh, and Rawleigh; although “Raleigh” appears most commonly today, he himself used that spelling .

Walter Raleigh was born around 1552 at Hayes Barton, in Devon, England. He was the half brother of Sir Humphrey Gilbert and Adrian Gilbert. Raleigh’s family had a fundamentally Protestant religious orientation and experienced a number of near escapes during the reign of the Catholic queen Mary I of England (1553 – 1558). During childhood, Raleigh developed a hatred of Catholicism, and proved quick to express it after the Protestant Elizabeth I came to the throne in 1558.

By 1581, after a number of military and naval engagements in France, Ireland and elsewhere, he had become established as a courtier and as Elizabeth’s favourite. The story that he once took off an expensive cloak and threw it over a mud puddle for Queen Elizabeth to walk across illustrates Raleigh’s flamboyant manner — the event probably never happened, but everyone had come to expect that sort of thing from Raleigh, and Elizabeth always favored that kind of showmanship.

Raleigh’s scheme for colonization in “Virginia” in North America (1585 onwards) ended in failure at Roanoke Island around 1587-1590. As somewhat of a travel agent, he put together a persuasive brochure encouraging Europeans to move to the New World. Eventually, a voyage was created, and the ships landed at Roanoke Island. They planned to drop the colonists off and then return a few months later with supplies for them.

Now, Roanoke Island, even today, has many bugs and mosquitos and is covered with very thick woods. It was not the ideal spot to leave the colonists. In about 1589 or 1590, the ships returned to Roanoke Island with supplies. They couldn’t find any of the colonists. Roanoke Island was not an ideal place to stay, and they searched for the colonists only for about 45 minutes. Adding to the mystery, they found the word “CROATAN” carved into a tree.

Historians guess what probably happened was that most of the women and children died soon after the landing, and the men became indoctrinated into the society of the local tribe, the Croatan. The European men took advantage of the native women, and so the native chief killed them.

Raleigh’s position of influence was greatly extended as he became one of Elizabeth’s spymasters, along with Francis Walsingham, and was largely responsible for the uncovering of the Babington plot (1586), a Catholic plot to dethrone Elizabeth and replace her with Mary, Queen of Scots; as a result of this Elizabeth granted Raleigh a 40,000 acre (160 km²) estate in Ireland. Mary became implicated in the Babington conspiracy and subsequently suffered execution (1587).

Raleigh was Governor of Jersey 1600-1603, responsible for modernising the defences of the island. He named the new fortress protecting the approaches to St. Helier Fort Isabella Bellissima, known thereafter in English as Elizabeth Castle.

Royal favour did not last, however. On November 17, 1603, after Elizabeth’s death, Raleigh went on trial for treason in the converted Great hall of Winchester Castle for supposed involvement in the Main Plot. His involvement in the Main Plot seems to have been confined to meeting with Henry Brooke, Lord Cobham and no more, but Raleigh was in disfavor at that point. He languished in the Tower of London until 1616. While imprisoned he wrote a book about ancient history (of Greece and Rome): A Historie of the World, also known as A History of the World.

After his second expedition to the Orinoco in search of El Dorado, Raleigh was beheaded for allegedly conspiring against James I of England. The film classic of the relationships between Queen Elizabeth, Raleigh, and his wife is 1955’s The Virgin Queen starring Bette Davis, Richard Todd, and Joan Collins.

Biography By: This article is licensed under the GNU Free Documentation License and uses material adapted in whole or in part from the Wikipedia article on Walter Raleigh.