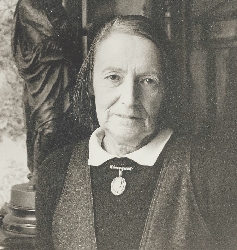 Born Florence Margaret Smith in Hull, England, Stevie Smith was a secretary at Newnes Publishing Company in London from 1923 to 1953, and occasionally worked as a writer and broadcaster for the BBC. Though she began publishing verse, which she often illustrated herself, in the 1930s, Smith did not reach a wide audience until 1962, with the publication of Selected Poems and her appearance in the Penguin Modern Poets Series.

She is noted for her eccentricity and mischievous humor, often involving an acerbic twist on nursery rhymes, common songs, or hymns. Force-fed with what she considered lifeless language in the New English Bible, she often aimed satirical barbs at religion. Smith won the Queen’s Gold Medal for poetry in 1969, two years before her death. She published three novels in addition to her eight volumes of poetry.

A Good Time Was Had By All

Mother, What is Man?

Not Waving But Drowning

Tenuous And Precarious (No Comments »)

Mother, Among The Dustbins (No Comments »)

Scorpion And Other Poems

Tender Only To One