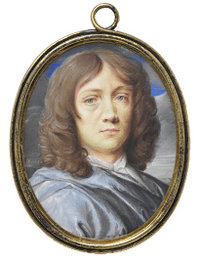 Thomas Flatman (1637-1688) was an English poet and miniature painter. There were several editions of his Poems and Songs (1674). One of his self-portraits is in the Victoria and Albert Museum. A portrait of Charles II is in the Wallace Collection, London. His miniatures are noted for their vitality.

He studied at New College, Oxford, and was later called to the bar. He was a staunch Royalist and one of his poems was to celebrate the return of Charles II in 1660.

Biography By: This article is licensed under the GNU Free Documentation License and uses material adapted in whole or in part from the Wikipedia article on Thomas Flatman.