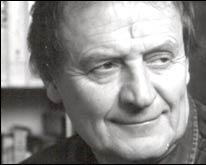 Tony Harrison (born April 30, 1937) is an English poet. He was born in Leeds and educated at Leeds Grammar School and Leeds University.

The material of much of his poetry is provided by the memories of his working-class childhood. His poems and translations show a powerful command of rhyme and an expert adaptation of colloquial speech. His best known collections are The Loiners and The School of Eloquence.

His best-known poem is the fairly long V. (1985), written during the miners’ strike of 1984-85, and describing a trip to see his parents’ grave in a Leeds cemetry “now littered with beer cans and vandalised by obscene graffiti”. The title has several possible interpretations: victory, versus, verse etc. Proposals to screen a filmed version of V. by Channel 4 in October 1987 drew howls of outrage from the tabloid press, some broadsheet journalists, and MPs, apparently concerned about the effects its “torrents of obscene language” and “streams of four-letter filth” would have on the nation’s youth. Indeed, an Early Day Motion entitled Television Obscenity was proposed on the 27th October 1987 by a group of Conservative MPs, who condemned Channel 4 and the Independent Broadcasting Authority. The motion was opposed by a single MP, Mr. Norman Buchan, who suggested that MPs had either failed to read or failed to understand (V.). The broadcast went ahead, and the brouhaha settled quickly after enough column inches had been written about the broadcast and reaction to the broadcast.

In 1998, he wrote and directed a film, Prometheus, based on his poem of the same name, which links the myth of Prometheus – chained on a rock to have his liver eaten by the vulture Ethon as a punishment for the theft of fire – with the enchainment of workers in the Promethian industries – the closed coal mines of Yorkshire; the present day effects of heavy industry in Copsa Mica in Romania; to the gas ovens of Auschwitz, to Dresden and to Bomber Harris. Prometheus the film involved driving a thirty foot golden statue of Prometheus from the industrial north of England to Greece, via Germany and a number of eastern European countries.

His translation of Hecuba (2005), which emphasised the relevance of Euripides’ drama to the Iraq War, was poorly received. Thom Yorke, the frontman and lyricist of Radiohead, considers Harrison as one of his heroes, describing V. as both ‘straightforward and wonderful’.

Biography By: This article is licensed under the GNU Free Documentation License and uses material adapted in whole or in part from the Wikipedia article on Tony Harrison.