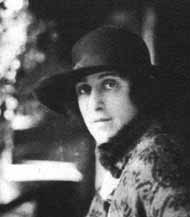 Vita Sackville-West (March 9, 1892 – June 2, 1962) was an English writer and landscape gardener. She helped plan her own gardens in Sissinghurst, Kent which provide the backdrop to Sissinghurst Castle.

She was born at Knole House in Kent, the daughter of the 3rd Baron Sackville and his wife Victoria Sackville-West. She was christened Victoria Mary Sackville-West but was known as “Vita” throughout her life. In 1913, she married Harold Nicolson, a diplomat, journalist, broadcaster, member of Parliament and author of biographies and novels.

Her long narrative poem, The Land, won the Hawthornden Prize in 1927.

Both Vita and her husband had several consecutive same-sex relations outside their marriage. The affair that had the deepest and most lasting effect on Vita’s personal life was that with Violet Trefusis. By the time both Vita’s sons were out of nappies, Vita and Violet had “eloped” several times (from 1918 on, mostly to France, where Vita would dress as a young man when they went out).

Vita wrote an autobiographical account about this period, which was later published by her son Nigel Nicolson as Portrait of a Marriage (note that this title was given by Nigel, and that he had to perform some heavy explaining in order to divert the attention that it was in fact the portrait of a extra-marital affair). Vita’s novel Challenge also bears witness of this affair: Vita and Violet had started writing this book as a collaborative endeavour, the male character’s name, Julian, being Vita’s nick-name while passing as a man, Lady Sackville finding the portrayal obvious enough to insist the novel not be published in England. Nigel (1973, p. 194), however, praises his mother: “She fought for the right to love, men and women, rejecting the conventions that marriage demands exclusive love, and that women should love only men, and men only women. For this she was prepared to give up everything … How could she regret that the knowledge of it should now reach the ears of a new generation, one so infinitely more compassionate than her own?”

Another affair was with Virginia Woolf in the late 1920s. As a part of this affair, Woolf wrote Orlando about Vita, which Nigel Nicolson called “the longest and most charming love-letter in literature”.

All these affairs (which are not fully listed here) were however no impediment for a true closeness between Vita and her husband, which appears from their nearly daily correspondence (also published later by their son Nigel), and from an interview they gave for BBC radio after the 2nd World War.

Her 1931 novel All Passion Spent is perhaps her best known work today. In this story, the elderly Lady Slane courageously embraces a long suppressed sense of freedom and whimsey after a lifetime of convention. The novel was faithfully dramatized by the BBC in 1986 starring Dame Wendy Hiller.

In 1946 Vita was made a Companion of Honour for her services to literature. The following year she began a weekly column in the Observer called In your Garden. In 1948 she became a founder member of the National Trust’s garden committee.

Biography By: This article is licensed under the GNU Free Documentation License and uses material adapted in whole or in part from the Wikipedia article on Vita Sackville-West.