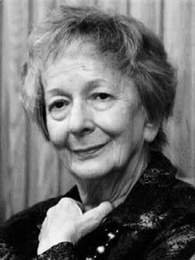 Wisława Szymborska (born July 2, 1923, died February 1, 2012) was a Polish poet, essayist and translator of French literature, laureate of Nobel Prize in Literature in 1996.

She was born in Bnin (now a part of Kórnik) near Poznań in Poland. In 1931 her family moved to Kraków. Since then, Szymborska has been linked with the city of Kraków where she studied, worked, and still resides in.

In March 1945, Szymborska published her first poem “Szukam słowa” (“I seek the word”) in the daily paper “Dziennik Polski.” From 1945 to 1948 she studied Polish language and sociology at the Jagiellonian University in Kraków.

Her poems were published in a variety of newspapers and periodicals for a number of years immediately after World War II.

In 1953, she joined the staff of the literature review magazine called “Życie Literackie” (Literary Life) where she continued to work until 1981. Szymborska wrote a book review column entitled “Lektury Nadobowiązkowe” (Non-required Reading). Many of the articles were later published in book form.

Szymborska has also translated French lyric poetry, especially Baroque poetry and Agrippa d’Aubigné. During the 1980s, she was participated in the Polish “samizdat” movement and wrote under the pseudonym Stanczykówna for “Arka” and in the exile magazine “Kultura”, which was published in Paris,France.

Her poetry has been translated to many European languages, Arabic, Hebrew, Japanese and Chinese.

Biography By: This article is licensed under the GNU Free Documentation License and uses material adapted in whole or in part from the Wikipedia article on Wisława Szymborska.