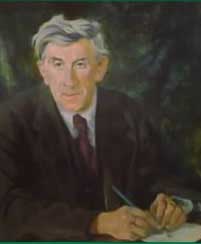 Austin Clarke (May 9, 1896 – March 19, 1974) was one of the leading Irish poets of the generation after W. B. Yeats. He also wrote plays, novels and memoirs. Clarke’s main contribution to Irish poetry was the rigour with which he used technical means borrowed from classical Irish language poetry when writing in English.

Clarke’s early poetry clearly shows the influence of Yeats. His first book, The Vengeance of Fionn was a long narrative poem retelling an Ossianic legend. It met with critical acclaim and, unusually for a first book of poetry, went to a second edition.

Between this and the 1938 collection Night and Morning, Clarke published a number of collections, all of which, to one extent or another, can be seen as being written in the shadow of Yeats. There was, however, one significant difference; unlike the older poet, Clarke was a Catholic, and themes of guilt and repentance run through this early work.

Between 1938 and 1955, Clarke published no new lyric or narrative poetry. Clarke returned to the publishing with the 1995 collection Ancient Lights, and was to continuing writing and publishing prolifically for the rest of his life. Although he continued to use the same Gaelic-derived technical means, this late poetry is markedly different from the earlier work. Many of the poems he now wrote were satires of the Irish church and state, while others were sensual celebrations of human sexuality, free of the guilt of the earlier poems. He also published the intensely personal Mnemosyne Lay in Dust, which is a poem sequence detailing the fictional Maurice Devanes’s nervous breakdown and subsequent recovery.

Clarke also came to admire the work of more avant-garde poets as Ezra Pound and Pablo Neruda, both of whom he wrote poems about. A number of the late long poems, such as, for instance, the 1971 Tiresias, show the effects of reading these poets in their looser formal structures.

Clarke set up the Bridge Press to publish his own work, which allowed him the freedom to publish work that many mainstream Irish publishers of the time might have been reluctant to handle. His Collected Poems was published in 1974 and a Selected Poems in 1976.

In addition to some twenty volumes of poetry and numerous plays, Clarke published three novels: The Bright Temptation (1932), The Singing Men at Cashel (1936), and The Sun Dances at Easter (1952). All of these were banned by the Irish Censorship Board. He also published two volumes of memoirs, Twice Round the Black Church (1962) and A Penny in the Clouds (1968) and a number of scattered critical essays and book reviews.

While all of these prose writings are of interest, Clarke’s reputation rests firmly on his poetry.

Biography By: This article is licensed under the GNU Free Documentation License and uses material adapted in whole or in part from the Wikipedia article on Austin Clarke.