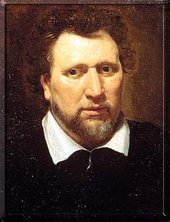 Although he was born in Westminster, Jonson claimed his family was of Border descent, and this may be confirmed by the fact that his coat of arms bears three spindles or rhombi, a device shared by a Border family, the Johnstones of Annandale. His father died a month before Ben’s birth, and his mother remarried two years later, to a master bricklayer. Jonson attended school in St. Martin’s Lane, and was
later sent to Westminster School, where one of his teachers was William Camden. On leaving, Jonson is said to have gone on to the University of Cambridge. Jonson himself said that he did not go to university, but was put to a trade immediately. He soon had enough of the trade, probably bricklaying, and spent some time in the Low Countries as a soldier.

Ben Jonson married some time before 1592. The registers of St Martin’s Church state that his eldest daughter Mary died in November, 1593, when she was only six months old. His eldest son Benjamin died of the plague ten years later (Jonson’s poem On My First Sonne was written shortly after), and a second Benjamin died in 1635. For five years somewhere in this period, Jonson lived separate from his wife, enjoying instead the hospitality of Lord Aubigny.

By the summer of 1597, Jonson had a fixed engagement in the Lord Admiral’s acting company, then performing under Philip Henslowe’s management at The Rose.

By this time, Jonson had begun to write original plays for the Lord Admiral’s Men; and in 1598 he was mentioned by Francis Meres in his Palladis Tamia as one of “the best for tragedy”. None of his early tragedies survive, however. An undated comedy, The Case is Altered, may be his earliest surviving play.

In 1597 he was imprisoned for his collaboration in writing the play The Isle of Dogs. Copies of the play were destroyed, so the exact nature of the offense is unknown. It was the first of several run-ins with the authorities.

In 1598, Jonson produced his first great success, Every Man in his Humour. William Shakespeare was among the first cast. This play was followed the next year by Every Man Out of His Humour, a pedantic attempt to imitate Aristophanes that was not a stage success.

Before the year 1598 was out, Jonson found himself back in prison and in danger of hanging. In a duel, on September 22 in Hogsden Fields, he had killed an actor of Henslowe’s company named Gabriel Spenser. In prison Jonson was visited by a Roman Catholic priest, and the result was his conversion to Catholicism, to which he adhered for twelve years. He escaped hanging by pleading benefit of the clergy, thus forfeiting his property and being branded on his left thumb. Neither the affair or his Catholic conversion seem to have negatively affected Jonson’s reputation, as he was back again at work for Henslowe within months.

In 1601, Jonson was employed by Henslowe to revise Thomas Kyd’s The Spanish Tragedy – hackwork which suggests his financial difficulties during this period.

At the beginning of the reign of James I of England in 1603, Jonson joined other poets and playwrights in welcoming the reign of the new King. Jonson quickly adapted himself to the additional demand for masques and entertainments introduced with the new reign and fostered by both the king and his consort, Anne of Denmark.

His trouble with English authorities continued. In 1603 he was questioned by the Privy Council about Sejanus, a politically-themed play about corruption in the Roman Empire. In 1605 he was imprisoned, along with John Marston and George Chapman, for poking fun at the Kings Scottish countrymen in Eastward Ho!.

With the success of his plays and masques, such as The Satyr (1603) and Masque of Blackness (1605) Jonson wrote less material for the public theatres and more for the court. From 1606 he was, along with Inigo Jones, responsible for “painting and carpentry.”

His powers as a dramatist were at their height during the earlier half of the reign of James I; and by the year 1616 he had produced nearly all the plays which are worthy of his genius. These include the tragedy of Catiline (acted and printed 1611), which achieved only a doubtful success, and the comedies of Volpone, (acted 1605 and printed in 1607), Epicoene, or the Silent Woman (1609), The Alchemist (1610), Bartholomew Fair (1614) and The Devil is an Ass (1616). This last was a failure (but a damned good play), and Jonson gave up writing plays for the public theaters for a decade. During this same period he produced several masques, usually in connection with Inigo Jones.

1616 also saw a pension of 100 marks a year conferred upon him, leading to his having been identified as the first poet laureate. This sign of royal favour may have encouraged him to publish the first volume of the folio collected edition of his works (1616).

In 1618 Jonson set out for his ancestral Scotland on foot. He spent over a year there, and the best-remembered hospitality which he enjoyed was that of the Scottish poet, William Drummond of Hawthornden. Drummond undertook to record as much of Jonson’s conversation as he could in his diary, and thus preserved for us aspects of Jonson’s personality that would otherwise have been lost. Jonson delivers his opinions, terse as they are, in an expansive mood either of praise or of blame. In the postscript added by Drummond, he is described as “a great lover and praiser of himself, a contemner and scorner of others”.

While in Scotland he was made an honorary citizen of Edinburgh, and on returning to England he was awarded an honorary Master of Arts degree from Oxford University.

Jonson returned to writing regular plays in the 1620s, but these are not considered among his best. They are of significant interest for the study of the culture of Charles I’s England. The Staple of News, for example, offers a remarkable look at the earliest stage of English journalism.

The burning of his library in 1623 was a severe blow, as his Execration upon Vulcan shows. In 1628 he became city chronologer of London; he accepted the salary but did little work for the office. He had suffered a debilitating stroke that year and this position eventually became a sinecure. In his last years he relied heavily for an income on his great friend and patron, William Cavendish, 1st Duke of Newcastle.

Jonson was nothing if not versatile, and went out of favour only with the accession of King Charles I in 1625. At his death he seems to have been working on another play, The Sad Shepherd. Though only two acts are extant, this represents a remarkable new direction for Jonson.

Jonson was buried in Westminster Abbey, with the inscription, “O Rare Ben Jonson”, laid in the slab over his grave. It has been suggested that this could be read “Orare Ben Jonson” (pray for Ben Jonson), which would indicate a deathbed return to Catholicism.

Biography By: This article is licensed under the GNU Free Documentation License and uses material adapted in whole or in part from the Wikipedia article on Ben Jonson.

Hymn To Diana (No Comments »)

Love Freed from Ignorance and Folly

So Breaks The Sun (No Comments »)

Come, My Celia (No Comments »)

The Hourglass (No Comments »)