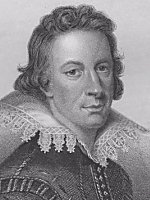 William Drummond (December 13, 1585 – December 4, 1649), called “of Hawthornden” Scottish poet, was born at Hawthornden, Midlothian. His father, John Drummond, was the first laird of Hawthornden; and his mother was Susannah Fowler, sister of William Fowler, poet and courtier.

Drummond received his early education at the high school of Edinburgh, and graduated in July 1605 as M.A. of the recently founded university of Edinburgh. His father was a gentleman usher at the English court (as he had been at the Scottish court from 1590) and William, in a visit to London in 1606, describes the festivities in connection with the visit of the king of Denmark.

Drummond spent two years at Bourges and Paris in the study of law; and, in 1609, he was again in Scotland, where, by the death of his father in the following year, he became laird of Hawthornden at the early age of twenty-four. The list of books he read up to this time is preserved in his own handwriting. It indicates a strong preference for imaginative literature, and shows that he was keenly interested in contemporary verse. His collection (now in the library of the university of Edinburgh) contains many first editions of the most famous productions of the age. On finding himself his own master, Drummond naturally abandoned law for the muses; “for,” says his biographer in 1711, “the delicacy of his wit always run on the pleasantness and usefulness of history, and on the fame and softness of poetry.” In 1612 began his correspondence with Sir William Alexander of Menstrie, afterwards earl of Stirling, which ripened into a life long friendship after Drummond’s visit to Menstrie in 1614.

Drummond’s first publication appeared in 1613, an elegy on the death of Henry, prince of Wales, called Teares on the Death of Meliades (Moeliades, 3rd edit. 1614). The poem shows the influence of Spenser’s and Sidney’s pastoralism. In the same year he published an anthology of the elegies of Chapman, Wither and others, entitled Mausoleum, or The Choisest Flowres of the Epitaphs. In 1616, the year of Shakespeare’s death, appeared Poems: Amorous, Funerall, Divine, Pastorall: in Sonnets, Songs, Sextains, Madrigals , being substantially the story of his love for Mary Cunningham of Barns, who was about to become his wife when she died in 1615.

The poems bear marks of a close study of Sidney, and of the Italian poets. He sometimes translates direct from the Italian, especially from Marini. Forth Feasting: A Panegyricke to the King’s Most Excellent Majestie (1617), a poem written in heroic couplets of remarkable facility, celebrates James’s visit to Scotland in that year. In 1618 Drummond began a correspondence with Michael Drayton. The two poets continued to write at intervals for thirteen years, the last letter being dated in the year of Drayton’s death. The latter had almost been persuaded by his “dear Drummond” to print the later books of Poly-Olbion at Hart’s Edinburgh press. In the winter of 1618-1619, Drummond had included Ben Jonson in his circle of literary friends, and at Christmas 1618 was honoured with a visit of a fortnight or more from the dramatist.

The account of their conversations, long supposed to be lost, was discovered in the Advocates’ Library, Edinburgh, by David Laing, and was edited for the Shakespeare Society in 1842 and printed by Gifford & Cunningham. The conversations are full of literary gossip, and embody Jonson’s opinion of
himself and of his host, whom he frankly told that “his verses were too much of the schooles, and were not after the fancie of the time,” and again that he “was too good and simple, and that oft a man’s modestie made a fool of his witt.” But the publication of what was obviously intended merely for a private journal has given Jonson an undeserved reputation for harsh judgments, and has cast blame on Drummond for blackening his guest’s memory.

In 1623 appeared the poet’s fourth publication, entitled Flowers of Sion: By William Drummond of Hawthornedenne: to which is adjoyned his Cypresse Grove. From 1625 till 1630 Drummond was probably for the most part engaged in travelling on the Continent. In 1627, however, he seems to have been home for a short time, as, in that year, he appears in the entirely new character of the holder of a patent for the construction of military machines, entitled “Litera Magistri Gulielmi Drummond de Fabrica Machinarum Militarium, Anno 1627.” The same year, 1627, is the date of Drummond’s munificent gift (referred to above) of about 500 volumes to the library of the University of Edinburgh.

In 1630 Drummond again began to reside permanently at Hawthornden, and in 1632 he married Elizabeth Logan, by whom he had five sons and four daughters. In 1633 Charles made his coronation-visit to Scotland; and Drummond’s pen was employed in writing congratulatory speeches and verses. As Drummond preferred Episcopacy to Presbytery, and was an extremely loyal subject, he supported Charles’s general policy, though he protested against the methods employed to enforce it. When Lord Balmerino was put on his trial on the capital charge of retaining in his possession a petition regarded as a libel on the king’s government, Drummond in an energetic “Letter” (1635) urged the injustice and folly of the proceedings. About this time a claim by the earl of Menteith to the earldom of Strathearn, which was based on the assertion that Robert III, husband of Annabella Drummond, was illegitimate, roused the poet’s pride of blood and prompted him to prepare an historical defence of his house.

Partly to please his kinsman the earl of Perth, and partly to satisfy his own curiosity, the poet made researches in the genealogy of the family. This investigation was the real secret of Drummond’s interest in Scottish history; and so we find that he now began his History of Scotland during the Reigns of the Five Jameses, a work which did not appear till 1655, and is remarkable only for its good literary style. His next work was called forth by the king’s enforced submission to the opposition of his Scottish subjects. It is entitled Irene: or a Remonstrance for Concord, Amity, and Love amongst His Majesty’s Subjects (1638), and embodies Drummond’s political creed of submission to authority as the only logical refuge from democracy, which he hated. In 1639 Drummond had to sign the Covenant in self-protection, but was uneasy under the burden, as several political squibs by him testify.

In 1643 he published ~iaaucLxLa: or a Defence of a Petition tendered to the Lords of the Council of Scotland by certain Noblemen and Gentlemen, a political pamphlet in support of those royalists in Scotland who wished to espouse the king’s cause against the English parliament. Its burden is an invective on the intolerance of the then dominant Presbyterian clergy.

His later works may be described briefly as royalist pamphlets, written with more or less caution, as the times required. Drummond took the part of Montrose; and a letter from the Royalist leader in 1646 acknowledged his services. He also wrote a pamphlet, A Vindication of the Hamiltons, supporting the claims of the duke of Hamilton to lead the Scottish army which was to release Charles I. It is said that Drummond’s health received a severe shock when news was brought of the king’s execution. He was buried in his parish church of Lasswade.

Drummond’s most important works are the Cypresse Grove and the poems. The Cypresse Grove exhibits great wealth of illustration, and an extraordinary command of musical English. It is an essay on the folly of the fear of death. “This globe of the earth,” says he, “which seemeth huge to us, in respect of the universe, and compared with that wide pavilion of heaven; is less than little, of no sensible quantity, and but as a point.” This is one of Drummond’s favourite moods; and he uses constantly in his poems such phrases as “the All,” “this great All.” Even in such of his poems as may be called more distinctively Christian, this philosophic conception is at work.

A noteworthy feature in Drummond’s poetry, as in that of his courtier contemporaries Ayton, Lord Stirling and others, is that it manifests no characteristic Scottish element, but owes its birth and inspiration rather to the English and Italian masters. Drummond was essentially a follower of Spenser, but, amid all his sensuousness, and even in those lines most conspicuously beautiful, there is a dash of melancholy thoughtfulness – a tendency deepened by the death of his first love, Mary Cunningham. Drummond was called “the Scottish Petrarch”; and his sonnets, which are the expression of a genuine passion, stand far above most of the contemporary Petrarcan imitations. A remarkable burlesque poem Polemo Middinia inter Vitarvam et Nebernam (printed anonymously in 1684) has been persistently, and with good reason, ascribed to him. It is a mock-heroic tale, in dog-Latin, of a country feud on the Fife lands of his old friends the Cunninghams.

Drummond’s Poems, with Cypresse Grove, the History, and a few of the minor tracts, were collected in 1656 and edited by Edward Phillips, Milton’s nephew. The Works of William Drummond of Hawthornden (1711), edited by Bishop Sage and Thomas Ruddiman, contains a life by the former, and some of the poet’s letters. A handsome edition of the Poems was printed by the Maitland Club in 1832. Later editions are by Peter Cunningham (1833), by William R Turnbull in “The Library of Old Authors” (1856), and by WC Ward (1894) for “The Muses’ Library.” The standard biography of Drummond is by David Masson (1873). Extracts from the Hawthornden manuscripts preserved in the Library of the Society of Antiquaries of Scotland were printed by David Laing in Archaeologia Scotica, vol. iv.

Biography By: This article is licensed under the GNU Free Documentation License and uses material adapted in whole or in part from the Wikipedia article on William Drummond.