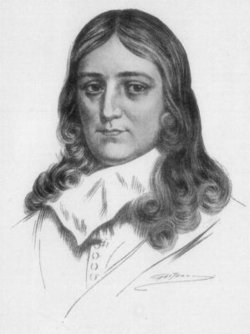 His father, John Milton Sr., was a well-off scrivener, and his grandfather a wealthy landowner in Oxfordshire who, hewing to the old faith, had disinherited Milton’s father after finding an English Bible in his possession.

Milton’s father – who contributed a collection of madrigals in honor of Elizabeth I – encouraged his ambitions; he was writing poetry by the age of nine. “When he was young,” Christopher, his younger brother, recalled to an early biographer after John’s death, “he studied very hard and sat up very late, commonly till twelve or one o’clock at night.” He was educated at St Paul’s School, London, and at Christ’s College, Cambridge (1625-32). While still at Cambridge he wrote some fine poems, among them the “Ode on the Morning of Christ’s Nativity” and the octosyllabics L’Allegro and Il Penseroso. While at Cambridge he developed a reputation for poetic skill and general erudition, although due to his hair, which he wore long, and his general delicacy of manner, he was known as the “Lady of Christ’s”, an epithet perhaps applied with some degree of scorn.

In 1638 and 1639 he traveled on the continent, coming into contact with such men as Grotius, Galileo, and Lucas Holete, but was recalled by a rumor of the outbreak of the English Civil War.

His incessant labours cost him his eyesight, but he retained his office until the Restoration, after which those who collaborated with Cromwell were sought. As Cromwell’s Secretary for Foreign Tongues and official propagandist, Milton was at the top of the list. He fled and went into hiding, but was caught and was arrested in October 1659. He would have been executed had not several influential people spoken on his behalf, including Andrew Marvell, his first assistant. Charles II decided to spare Milton, and he was released from prison on December 15.

Milton then lived in retirement, devoting himself once more to poetical work, and publishing Paradise Lost in 1667, the epic by which he attained universal fame (blind and impoverished he sold the copyright to this work on April 27th that year for £10), to be followed by the much inferior Paradise Regained, together with Samson Agonistes, a drama on the Greek model, in 1671.

Milton was originally destined to a ministerial career, but his independent spirit led him to “prefer a blameless silence before the sacred office of speaking bought and begun with servitude and forswearing.” He spent five quiet years at Horton, Berkshire a small village near Windsor where his family rented a house between 1632 and 1640, reading and writing. To this period belong “Arcades”, “Comus”, and “Lycidas”, all breathing the lofty spirit of his religious convictions.

The next twenty years were devoted almost entirely to prose work in the service of the Puritan cause, although some of his beliefs were unconventional to the point of heresy. In 1641 and 1642 appeared his tractates Of Reformation touching Church Discipline in England, Of Prelatical Episcopacy, the two defenses of Smectymnuus (an organization of protestant divines named after their initials), and The Reason of Church Government Urged against Prelaty. With frequent passages of real eloquence lighting up the rough controversial style of the period, and with a wide knowledge of ecclesiastical antiquity, he struck weighty blows at the intolerant High-church party which seemed to dominate the Church of England.

His intercourse with Hartlib and Comenius led him to write in 1644 a short tract on ducation, urging a reform of the national universities; and in the same year appeared the most popular of his prose writings, Areopagitica, a Speech for the Liberty of Unlicensed Printing.

The Tenure of Kings and Magistrates (1649) announced his adhesion to the cause of the Commonwealth, to which he was made Latin secretary in March. As part of his duties in this post, he wrote his Eikonoklastes (1649) in reply to the Eikon Basilike popularly attributed to Charles I, the first Pro populo Anglicano defensio (1651) against Salmasius, and in 1654 his
Defensio secunda and Pro se defensio; and his fine Latin style was of great avail for the drafting of the state papers which passed between Oliver Cromwell’s government and the continent.

Milton’s religious position, partially expressed in the treatises named above and in his Civil Power in Ecclesiastical Causes and Considerations touching the Likeliest Means to Remove Hirelings out of the Church (1659), is most clearly described in the posthumous and apparently unfinished De Doctrina Christiana, the manuscript of which, long lost, was discovered only in 1823. A number of recent Milton scholars believe De Doctrina Christiana was, like his Artis Logicae, a modification and revision of the writings of others, and since it was incomplete, they conclude “[W]e cannot know what other changes, especially what deletions of doctrines to which he did not subscribe, Milton would have made in completing his task [of revision]” (Campbell, 1996).

If, however, De Doctrina Christiana accurately represents Milton’s opinions, we would find that his religious point of view is entirely subjective and individualistic; that is, his faith would be deduced from Scripture by the inner illumination of the Spirit, not tied to human traditions. It would, therefore, not be surprising to find him taking his own view on the Trinity, the divinity of Christ and the Holy Ghost, predestination, the creation of the world, etc., as also in regard to practical questions such as marriage, infant baptism, and the observance of the sabbath. What we find in the book is not a complete, scientific treatment of doctrine in the modern sense but an exposition of the clear and universally acceptable teaching of scripture.

In many points Milton is the prophet and herald of a new era, a Protestant individualist and idealist, as well as a typical figure for the revolutionary cause to which he devoted the best powers of his life.

In June 1642, Milton married 16 year-old Mary Powell. A month later, she visited her family and didn’t return. Over the next three years, Milton published a series of pamphlets arguing for the legality and morality of divorce, the first entitled The Doctrine and Discipline of Divorce, in which he attacked the English marriage law as it had been taken over almost unchanged from medieval Catholicism, sanctioning divorce on the ground of incompatibility or childlessness.

In 1645, Mary finally returned. In 1646, her family, having been ejected from Oxford for supporting Charles I in the Civil War, moved in with the couple. They had 4 children: Anne, Mary, John, and Deborah. Mary died on May 5, 1652 from complications following Deborah’s birth on May 2, which may have affected Milton deeply, as evidenced by his 23rd sonnet. In June, John died at age 15 months; it is not known if Anne, Mary, or Deborah survived to adulthood.

On November 12, 1656, Milton married Katherine Woodcock. She died on February 3, 1658, less than 4 months after giving birth to their daughter, Katherine, who died on March 17. On February 24, 1663, Milton married Elizabeth Minshull, who cared for him until his death.

Biography By: This article is licensed under the GNU Free Documentation License and uses material adapted in whole or in part from the Wikipedia article on John Milton.

On The Morning Of Christs Nativity (No Comments »)

The Poetical Works of John Milton