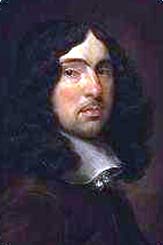 Andrew Marvell (March 31, 1621 – August 16, 1678) was an English metaphysical poet, and the son of an Anglican clergyman. As a metaphysical, he is associated with John Donne, George Herbert, and Ben Jonson. He was the first assistant of John Milton.

After attending Cambridge, Marvell went on the Grand Tour; while England was embroiled in a civil war from 1642 to 1647, Marvell was on the continent. After returning, he worked as tutor to the daughter of Thomas Fairfax, who had recently given command of Parliamentary army to Oliver Cromwell. In 1657, Marvell joined Milton, who by that time had lost his sight, in the post of Latin secretary to Cromwell’s Council of State. In 1659 he was elected to Parliament from his hometown of Hull in Yorkshire; in 1660 the monarchy was restored. His political maneuvering must have been skilful, because he not only avoided all punishment for his cooperation with republicanism but helped convince the government of Charles II not to execute Milton for his antimonarchical writings and revolutionary activities. (Marvell also contributed an eloquent prefatory poem to the second edition of Paradise Lost.)

From 1659 until his death, Marvell was a conscientious member of Parliament, answering letters from his constituents and going on two diplomatic missions, one to Holland and the other to Russia. He also wrote prose satires (anonymously, of course) criticizing the monarchy, defending Puritan dissenters, and denouncing censorship.

Famous poems include To His Coy Mistress ( to which T. S. Eliot refers in The Love Song of J. Alfred Prufrock) and The Garden.

Biography By: This article is licensed under the GNU Free Documentation License and uses material adapted in whole or in part from the Wikipedia article on Andrew Marvell.