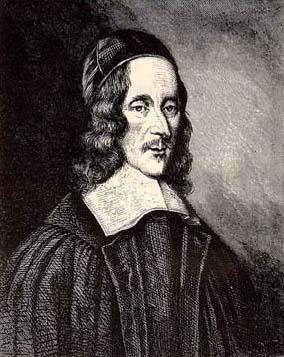 George Herbert (April 3, 1593 – March 1, 1633) was an English poet and orator. Despite living for only 40 years, his stock as a poet has risen and risen. Remarkably, none of his work was published in his lifetime. The poems of his final years, written while as a clergyman at Bemerton near Salisbury, are like nothing else in literature. They combine a profound spirituality with a restless experimentation. Their language remains fresh and inspiring today.

Herbert balanced a secular career with a life of theological contemplation. Herbert’s family was wealthy, eminent, intellectual and fond of the arts. Herbert’s mother, Magdalen, was a patron and friend of John Donne and other poets. Herbert’s brother, Edward (after being knighted by James I, Lord Herbert of Cherbury) was a poet and philosopher who tried to reconcile Christianity with rationalism; he is often referred to “as the father of English deism.”

After graduating from Trinity College, Cambridge, Herbert took the post of “public orator” of Cambridge, a position to which he was probably appointed because of his poetic skill. In 1624 he became a Member of Parliament. Both jobs indicate an intent to have a career at court; but 1625 witnessed the death of James I, who had shown favor to Herbert, and in the late 1620s, however, two influential patrons of Herbert died. Thus Herbert’s choice of a career in the Church of England – he was ordained in 1630 – was, to some extent, pragmatic.

He took up his duties in a rural parish in Wiltshire, about 75 miles southwest of London. He was an earnest and conscientious priest. In poor health, he died only three years after taking holy orders. On his deathbed, he gave the manuscript of The Temple , his collection of poetry, to Nicholas Ferrar, the founder of a semi-monastic Anglican religious community at Little Gidding (a name best known today through the poetry of T.S. Eliot), telling him to publish the poems if he thought they might “turn to the advantage of any dejected poor soul”, and otherwise, to burn them. By 1680 The Temple had gone through thirteen printings.

Herbert the poet is at all times in pursuit of what Jacques Derrida has called a ‘transcendental signifier’, God’s summarising logos, the last syllable of recorded time, as the divine extension of the Book of Genesis (In the beginning, God said …), suspiration that renders as revealed and knowable everything that has been uttered and written in between, life and the world as a sacred inscription:

“Thy rope of sands,
Which petty thoughts have made, and made to thee
Good cable, to enforce and draw,
And be thy law,
While thou didst wink and would not see.”

Biography By: This article is licensed under the GNU Free Documentation License and uses material adapted in whole or in part from the Wikipedia article on George Herbert.