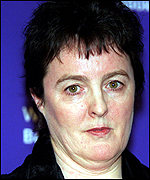 Carol Ann Duffy (born December 23, 1955) is a British poet born in Glasgow. She grew up in Staffordshire and graduated in philosophy from Liverpool University in 1977, before moving to London. She now lives in Manchester with her daughter Ella (born 1995) and her partner, the poet Jackie Kay.

In her first collection Standing Female Nude (1985) she often uses the voices of outsiders while Selling Manhattan (1987) contains more personal verse. Her later collections are The Other Country (1990) and Mean Time (1993).

A number of very successful children’s collections include ‘Meeting Midnight’ (1999) and The Oldest Girl in the World (2000). The World’s Wife (1999) saw her retelling famous stories and fables — Midas, King Kong, Elvis — as wry and exuberant ‘feminist’ documents from the point of view of real or imagined women. Her most recent collection Feminine Gospels (2002) continues this vein, showing an increased interest in long narrative poems, accessible in style and often surreal in their imagery. She is perhaps one of the few poets in the UK to combine academic integrity with accessibility and popularity.

Carol Ann Duffy was almost appointed the British Poet Laureate in 1999 (after the death of previous Laureate Ted Hughes), but lost out on the position to Andrew Motion. According to the Sunday Times, Downing Street sources stated unofficially that Prime Minister Tony Blair was ‘worried about having a homosexual poet laureate because of how it might play in middle England’. Duffy later claimed that she would not have accepted the laureateship anyway, saying in an interview with the Guardian newspaper that ‘I will not write a poem for Edward and Sophie. No self-respecting poet should have to.’ She says she regards Andrew Motion as a friend and that the idea of a contest between her and him for the post was entirely invented by the newspapers. She is also a popular amongst teenagers as many learn her poetry as part of their A-level and GCSE exams.

Biography By: This article is licensed under the GNU Free Documentation License and uses material adapted in whole or in part from the Wikipedia article on Carol Ann Duffy.