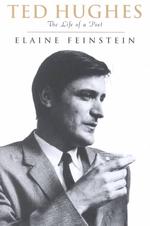 He was born in Mytholmroyd, West Yorkshire and is generally regarded as one of the best poets of his generation. This was reflected in his appointment as Poet Laureate (the British Queen’s official poet) in 1984, following the death of John Betjeman (although it was later hinted that Hughes was second choice for the appointment after Philip Larkin, the preferred nominee, declined, feeling his poetic gifts spent).

Hughes earlier poetic work is rooted in nature and, in particular, the innocent savagery of animals (Byron’s phrase “nature, red in tooth and claw” could have been written for Hughes). Hughes later work is deeply reliant upon myth and the bardic tradition.

His first collection, Hawk in the Rain (1957) attracted considerable critical acclaim. In 1959 he won the Galbraith prize which brought $5000. His most significant work is perhaps Crow (1970).

Tales from Ovid (1997) contains a selection of free verse translations from Ovid’s Metamorphoses. In Birthday Letters, Hughes broke his silence on Plath, detailing aspects of their life together and his own behaviour at the time. The cover artwork was by their daughter Frieda.

Hughes studied English, anthropology and archaeology at Pembroke College, Cambridge, where he met fellow poet Sylvia Plath. They married on June 16, 1956, separating in the autumn of 1962. Plath’s suicide in 1963 has long been a subject of much speculation by feminist critics. As Plath’s widower, Hughes became the executor of Plath’s personal and literary estates. He oversaw the publication of her manuscripts, including Ariel (1966). He also destroyed the final volume of Plath’s journal, detailing their last three years together.

Prior to Plath’s death, Hughes and his children moved into the flat of his lover, the poet Assia Wevill. Their daughter, Alexandra Tatiana Eloise Wevill, nicknamed Shura, was born on March 3, 1965. Assia killed herself and Shura on March 25, 1969.

In August 1970, Hughes married Carol Orchard, a nurse. They remained together until his death.

In addition to poetry, Hughes wrote classical opera librettos and children’s books. One of these, The Iron Man, became the basis of Pete Townshend’s rock opera of the same name, and the animated film The Iron Giant.

Biography By: This article is licensed under the GNU Free Documentation License and uses material adapted in whole or in part from the Wikipedia article on Ted Hughes.

The Minotaur (No Comments »)

The Hawk in the Rain

How To Paint A Water Lily (No Comments »)