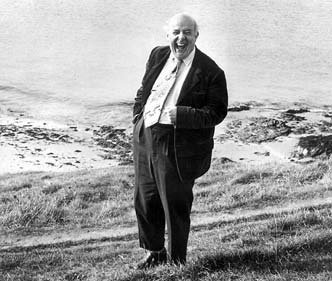 Sir John Betjeman (28 August 1906 – 19 May 1984) was a British poet and writer on architecture. He was born in Highgate, London, his surname indicating his Dutch ancestry. He left Magdalen College, Oxford without a degree due to lack of work which resulted in his failing his divinity exams. In his verse autobiography, Summoned by Bells (1960), Betjeman tells the story of his early life, up to his employment as a teacher at a preparatory school.

Later, Betjeman obtained employment as a journalist, before joining the civil service. It has recently been revealed that his wartime duties entailed providing secret intelligence reports.

Betjeman never took himself too seriously. His poems are often humorous, and in later life he enjoyed a career as a broadcaster, his popularity being in no small measure due to his bumbling image. He became Poet Laureate in 1972, succeeding Cecil Day Lewis. One of his first duties was to produce a poem in honour of the wedding of Princess Anne.

John Betjeman died at Trebetherick, Cornwall in his 78th year.

From A Few Late Chrysanthemums:

Biography By: This article is licensed under the GNU Free Documentation License and uses material adapted in whole or in part from the Wikipedia article on Sir John Betjeman.