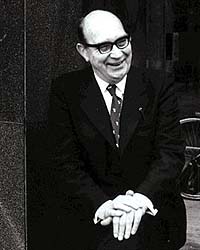 Philip Arthur Larkin was born in Coventry on 9 August 1922, the only son and younger child of Sydney and Eva Larkin. His father was City Treasurer of Coventry from 1922 to 1944, and died from cancer in 1948 at the age of 63. His mother lived to be 91 and died on 17 November 1977. The family lived in Coventry between 1922 and 1940. Larkin attended King Henry VIII School there between 1930 and 1940. His early talent as a writer was shown in his regular contributions to The Coventrian, the school magazine, of which he was joint editor between 1939 and 1940.

In October 1940 Larkin went to St John’s College, Oxford. He failed his army medical as a result of poor eyesight and so was able to complete his degree uninterrupted, graduating with First Class Honours in English in 1943. His close friends at Oxford included Kingsley Amis and Bruce Montgomery, and many of them shared his passion for jazz music. Strongly influenced by, amongst others, Auden, Lawrence and Yeats, Larkin’s literary talent developed rapidly. His first poem to be published in a national weekly was ‘Ultimatum’ in The Listener, 28 November 1940. In June 1943 three of his poems were included in Oxford Poetry 1942-43.

For the first few months after graduating Larkin lived with his parents in their new Warwick home, spending much of his time on his first novel, Jill. Two attempts to get into the Civil Service failed and he eventually applied for, and was appointed to, the post of Librarian at Wellington in Shropshire in November 1943. Despite a full-time job and part-time study to qualify as a professional librarian, he continued to write and publish. Ten poems were included in Poetry from Oxford in Wartime in February 1945. All of these were then included in his own The North Ship later that year. Jill finally appeared a year later, but, like The North Ship, attracted little public comment. His second novel, A Girl in Winter, was completed in May 1945 and published in February 1947, this time attracting several favourable reviews.

Larkin took up a post as Assistant Librarian at the then University College of Leicester in September 1946, where he was in charge of the issue desk and periodicals. He completed his course of professional studies and became an Associate of the Library Association in 1949. From 1 October 1950 he was Sub-Librarian at Queen’s University, Belfast, where his duties involved the supervision of 18 staff. Belfast saw a resurgence of his poetic activity after the rejection of his second poetry collection, In the Grip of Light, in 1948. He had a small collection, XX Poems, privately printed in an edition of 100 copies in 1951 and the Fantasy Press published a pamphlet containing five of his poems in 1954. Other poems were published in various magazines. ‘Toads’ and ‘Poetry of departures’ appeared in Listen issued by the Marvell Press of Hessle near Hull. By coincidence, Larkin’s next book, largely comprising the poems from XX Poems and the Fantasy Press pamphlet, was being prepared by the Marvell Press when he was appointed Librarian to the University of Hull, where he commenced work on 21 March 1955. The Marvell Press book, initially called ‘Various Poems’ was published as The Less Deceived in October of that year, establishing him thereafter in the front rank of modern British poets.

The Library at Hull inherited by Larkin contained 120,000 volumes and employed just 11 staff housed in an assortment of badly designed buildings. Larkin, greatly aided for many years by the support of the Vice-Chancellor, Professor (later Sir) Brynmor Jones, and the boom in British higher education of the late 1950s and 1960s, presided over its transformation during the next two decades. A new purpose-built Library was opened in two stages in 1960 and 1970, and by 1985 there were over 750,000 items in stock, a computerised catalogue and circulation system, and over 80 staff.

In 1964 his next poetry collection, The Whitsun Weddings, was again widely acclaimed and in 1965 he received the Queen’s Gold Medal for Poetry. Larkin’s continuing interest in jazz was reflected in his monthly record reviews for The Daily Telegraph between 1961 and 1971. A collection of these reviews entitled All What Jazz: a record diary 1961-1968 was published in 1970. Larkin also prepared the Oxford Book of Twentieth Century English Verse, issued in 1973 and completed after he had held a visiting fellowship at All Souls College, Oxford for two terms in 1970-71.

The last collection of his own poetry, High Windows, appeared in 1974, and consolidated his reputation. However, his poetic output by this time had practically ceased. ‘Aubade’, his last great poem, appeared in the Times Literary Supplement in December 1977. To colleagues, Larkin wryly referred to The Brynmor Jones Library, 1929-1979: a short account as his ‘last book’. However, Required Writing: miscellaneous pieces 1955-1982, a collection of essays and reviews, was published in November 1983. A best-seller, it won the W.H. Smith Literary Award for 1984.

The numerous other awards received during his later years included many honorary doctorates culminating in one from Oxford University in 1984. He received the CBE in 1975 and the German Shakespeare-Preis in 1976. He was Chairman of the Booker Prize Panel in 1977, was made Companion of Literature in 1978, and from 1980 to 1982 served on the Literature Panel of the Arts Council. The Library Association made him an Honorary Fellow in 1980 and the University of Hull made him a Professor in 1982. In 1984 he was elected to the Board of the British Library, but declined to succeed Sir John Betjeman as Poet Laureate, being unwilling to accept the level of media attention associated with the position.

His last and most highly prized honour was the Order of the Companion of Honour in June 1985, which, sadly, he was unable to receive personally owing to the onset of his terminal illness. He died of cancer on 2 December 1985 aged 63. His Collected Poems, which also included many of his previously unpublished pieces, was published in October 1988 and became an immediate best-seller. The publication of his Selected Letters in October 1992 was the literary event of the year.

Love, We Must Part Now (No Comments »)

Next, Please (No Comments »)