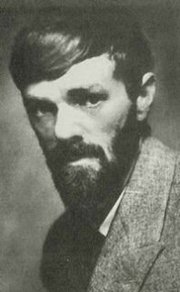 David Herbert Lawrence (11 September 1885 – 2 March 1930) was one of the most important, certainly one of the most controversial, English writers of the 20th century, who wrote novels, short stories, poems, plays, essays, travel books, and letters.

The son of a coal miner, Lawrence was born in Eastwood, Nottinghamshire, United Kingdom. His mixture of working and middle class parents and their often volatile relationship had a great impact on the literature of this English writer. In 1902 he contracted pneumonia and his career as a factory clerk, which had barely started, came to an end. He began training as a teacher first teaching the sons of miners in his home town and then returning to education to receive a teaching certificate from University College Nottingham in 1908.

While working as a teacher in Croydon some of his poetry came to the attention of Ford Maddox Hueffer editor of The English Review, who commissioned the story ‘Odour of Chyrsanthemums’ which, when published in that magazine, provoked a London publisher to ask Lawrence for more work, and his career in literature began. Shortly after his first novel was published, The White Peacock, in 1910 Lawrence’s mother died after a long illness. It is suggested by some that Lawrence may have helped his mother to die by giving her an overdose. Lawrence, the author of Sons And Lovers, (1913), had an extremely close relationship with his mother and her death was a major turning-point in his life just as the death of Mrs Morel forms a major turning-point in the novel.

Pneumonia struck again soon after his mother’s death and this lead to the tuberculosis which would eventually kill him. He decided on his recovery to abandon teaching to concentrate on writing. In 1912 Lawrence eloped to Germany with Frieda Weekley née von Richthofen (distant cousin of Manfred von Richthofen, also known as “the Red Baron”), the wife of his modern languages professor from Nottingham University. They returned to England at the outbreak of World War I and were married on the 13 July 1914. Because of Frieda’s German parentage and Lawrence’s pacifism they were viewed with suspicion in England during the war and lived in near poverty. The Rainbow (1915) was suppressed after an investigation into its obscenity in 1915. They were even accused of spying and signalling to German submarines off of the coast of Cornwall where they lived.

After the war Lawrence began what he termed his ‘savage pilgrimage’. He left England, to return only twice for short visits, and with Frieda spent the rest of his life travelling, settling down for only short periods. His travels took him to France, Italy, Ceylon, Australia, America and Mexico. He dreamed of establishing a utopian community on the ranch in Taos, New Mexico where he lived for several years but another bout of pneumonia forced him to return to Europe where he lived in Italy, while writing the various versions of Lady Chatterley’s Lover (1929), which was published in private editions in Paris.

He died in Vence, France in 1930. Frieda returned to live on the ranch in Taos and later brought Lawrence’s ashes to rest there. His birthplace, in Eastwood, 8a Victoria Street, is now a museum.

Biography By: This article is licensed under the GNU Free Documentation License and uses material adapted in whole or in part from the Wikipedia article on D.H. Lawrence.