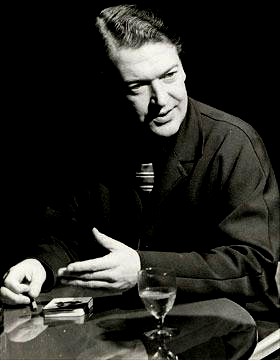 Sir Kingsley William Amis (April 16, 1922 – October 22, 1995) was an English novelist, poet, critic, and teacher. He wrote more than twenty novels, three collections of poetry, short stories, radio and television scripts, and books of social and literary criticism. He is the father of English novelist Martin Amis.

Kingsley Amis was born in London, educated at the City of London School and St. John’s College, Oxford, where he met Philip Larkin, forming the most important friendship of his life. After serving in the army’s Royal Corps of Signals, he completed university in 1947, and was a lecturer in English at the University of Wales Swansea (1948–61), and Cambridge (1961–63).

Amis achieved popular success with his first novel Lucky Jim, which is considered the exemplary novel of Fifties Britain. The novel won the Somerset Maugham Award for fiction and Amis was associated with the writers labelled Angry Young Men. Lucky Jim is a seminal work, the first English novel featuring an ordinary man as anti-hero. As a poet, Amis was associated with The Movement.

As a young man, Kingsley Amis was vocally Stalinist, and a member of the Communist Party. He became disillusioned with Communism, finally breaking with it when the USSR invaded Hungary in 1956. Thereafter, Amis was stridently anti-communist, even reactionary. He discusses his political change of heart in the 1967 essay “Why Lucky Jim Turned Right”; it percolates into later works such as Russian Hide and Seek (1980).

Amis’ novel about a group of retired friends, The Old Devils, won the Booker Prize in 1986. He received a knighthood in 1990.

Amis was twice married, first in 1948 to Hilary Bardwell, then to novelist Elizabeth Jane Howard, in 1965; they divorced in 1983. He had three children, including the novelist Martin Amis, who movingly wrote of his father’s life and decline, largely due to alcohol, in his memoir Experience.

Biography By: This article is licensed under the GNU Free Documentation License and uses material adapted in whole or in part from the Wikipedia article on Kingsley Amis.

A Note On Wyatt (No Comments »)